If you’ve ever dreamed of joining the seven-figure club, you’re not alone. Many Americans fantasize about having a net worth north of $1 million. In fact, to be considered “rich,” most Americans believe you need an average net worth of $2.4 million.

Although Americans may be divided about what exactly it means to be “rich,” millionaire status still holds a certain allure.

When it comes to reaching millionaire status, there are a variety of factors at play. Some are out of your control—inheritances and the generational passing of wealth—but a lot of factors are in your control.

Your savings rate, career path, and income are often cited as the most important factors for generating wealth, but there’s another factor that’s also important: location.

The importance of location in building wealth

Alex Felice, a financial analyst and money expert in Las Vegas, Nevada, explains that there are three primary factors to think about when considering the relationship between location and wealth.

“If you’re trying to build wealth and are thinking of different locations, you’ll want to think about three main things: cost of living, career opportunities, and the real estate market. For most people, real estate provides a huge opportunity to create wealth, so where you decide to live is important.”

When it comes to the relationship between location and wealth, it’s hard to know which came first: the location or the wealth.

Regardless of the order, though, it’s interesting to consider the cities with the most millionaires and whether or not the city was a factor in building the wealth or simply served as a haven for millionaires once they had acquired it.

Top cities with the most millionaires

According to a 2017 study by GlobalData WealthInsight, these are the top 10 cities with the highest density of millionaires. 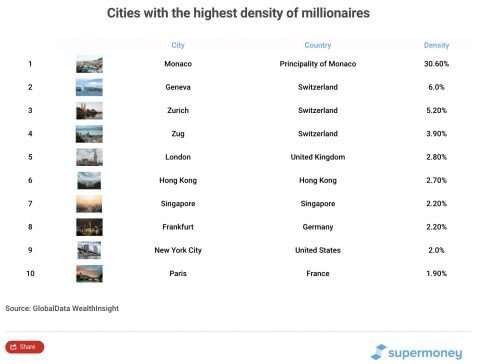 Interestingly, New York City is the only city in the United States to make the list. However, the landscape changes when you look at the cities with the most multimillionaires. 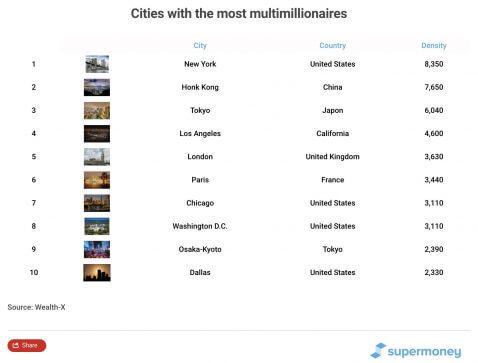 United States also fares better when you look at the number of billionaires. 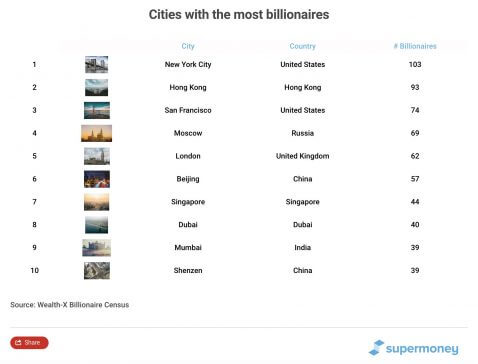 If you rank those cities according to the density of billionaires, San Francisco, Dubai, and New York make the top three. 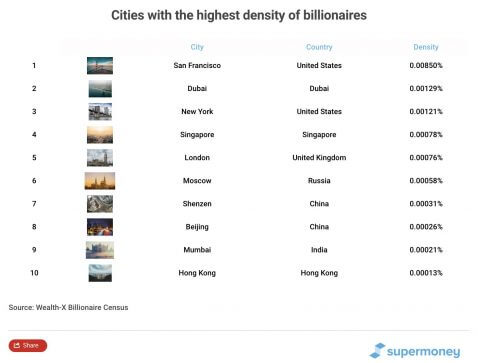 At first glance, it might seem like a lot of these cities don’t have much in common. After all, many are located in different countries and even different continents.

But all of these cities have one thing in common: the cost of living. The cities on this list are all expensive places to live.

So, if you’re growing your net worth, does it make sense to move to one of the cities on this list? Although some people might argue that it is worth it because of the potential to land a high-paying job, that might not always be the case.

Felice explains, “There’s a misconception that, to build wealth, you need to live in one of the most expensive cities, but that’s not necessarily true.”

If you’re in the stage of acquiring wealth, living in one of the cities with the most millionaires per capita might not make financial sense.

The formula for building wealth

Of course, there are exceptions. “It’s important to consider your field. If you’re in a specialized field, you might need to live in a specific city.

It’s impossible to know whether someone became wealthy because of the city in which they live or if they moved to a specific city because they were already members of the seven-figure club.

When it comes to the relationship between wealth and location, there are three primary factors to consider: cost of living, career opportunities, and real estate. The perfect mixture will often depend on your priorities, career, and desires.

So, regardless of where you currently fall on the wealth spectrum, you’ll want to consider all three of those things before choosing a city in which to settle.

To learn more about how to reach your goal of buying a home, be sure to explore SuperMoney’s “How to Buy a House” section.

Taylor Milam is a personal finance writer and educator who recently paid off $14,000 of student loans in less than a year. Her work has been featured in Credit Karma, Business Insider and The Financial Diet.