In the last two weeks, we have seen the two worst single-day drops in the history of the Dow Jones Industrial Average (DJIA). However, on Wednesday, the Dow also saw its best day since 1933, with a 13% rise. Did the stock market already hit bottom? Unlikely.

Wall Street forecasters are quickly ramping up their predictions for continued massive job losses and declines in economic activity. They’re offering estimates unseen since the Great Depression that began in 1929 and continued for a brutal decade, reshaping governments and economies across the globe.

What is a recession? The National Bureau of Economic Research defines a recession as “a significant decline in economic activity spread across the economy, lasting more than a few months. Usually, recessions are noticeable in the real GDP, real income, employment, industrial production, and wholesale-retail sales.” Read about how to recession-proof your finances here.

Nobody knows how this pandemic will turn out and what its effect will be on the stock market and economy, but it’s pretty clear we are looking at a massive reduction in GDP. We are living through unprecedented events, and there isn’t an exact historical example economists can use to model their forecasts.

We still don’t know how deadly the COVID-19 pandemic will be and the full extent of its effect on the economy. However, a report by epidemiologists at London’s Imperial College that has influenced the recent mitigation strategies taken by the U.S. and the U.K. predicts that an uncontrolled spread of the disease would cause as many as 2.2 million deaths in the United States and that even ambitious mitigation measures would only reduce the mortality to 1.1 million deaths.

By any measure, the challenge ahead is monumental.

Few economists believe that the giant rescue package from Washington will be enough to offset the damage that’s already been done to the U.S. economy — a cost that’s mounting by the day.

Are we heading into a recession? Certainly. Is this just the beginning of a bear market? Most likely. Will this be the next Great Depression? It is still too soon to know how bad it’s going to get.

Economic recovery is not like flipping a light switch

Anyone still suggesting this is going to be short-lived with a V-shaped recovery is taking an incredibly short-sighted macro perspective.

There’s a bit of naiveté and wishful thinking in the assumptions there will be a V-shaped recovery in third quarter. Much of the analysis to date appears to be based on information we have now without thinking through where we are going.

As someone who has first-hand experience in how challenging it is to build a small businesses, it seems like Wall Street economists are being unrealistic about how many small businesses will not survive the quarter – and they make up about half of private-sector jobs.

These shocks are continuing to unfold and hence why we see forecasts continue to degrade. There are so many ripple effects exacerbating the downturn that are coming to light.

Even the stimulus itself has recessionary ripple effects. Mortgage servicers granting homeowners forbearance are still on the hook with investors to continue paying principal and interest on the mortgages. They also must make payments to mortgage insurers, property insurers and local tax authorities. This will spark a crippling cash crunch in the real estate finance industry unless the Federal Reserve steps in with even more emergency lending.

More adverse second-round effects on income and spending will come further down the road.

What happens after we stop the quarantine measures? Without large scale testing and masks available, outbreaks will just keep happening. The other 320M+ Americans still don’t have immunity.

Future flare-ups with repeated stay at home orders are possible. Social distancing may have to be practiced off and on for the next 18 months.

Let’s assume we figure out ubiquitous testing and get protective masks on everyone’s face, we still have a year or two of managing slow growth of the virus before scalable treatments, a vaccine or herd immunity takes hold.

Furthermore, this is a global health crisis, not an American health crisis. Even if we get things under control here, as long as any one country does not, the risk will continue.

Government programs will provide some support to the unemployed and struggling businesses but for how long? What will it take to bring the economy back to life after a deep freeze?

The economy is not a light switch.

Even if the government writes checks to replace all wages and all business revenues for an extended period of time, if the economy is not functioning to produce goods and services consumption won’t return.

If you don’t think the pandemic shutting down large parts of the economy was enough to deal with, there are multiple pockets of massive risk that could generate a financial crisis on their own.

Many of the economic contraction forecasts we’ve seen thus far have focused on quantifying the loss of economic output tied to sudden stops. However, it’s probable the coronavirus crisis is only the first domino to fall on a broader financial crisis.

Federal officials have been eager to remind Americans that this is not like 2008 – that our banks are solvent, and this is not a financial crisis. But there are a lot of financial assets out there that are quickly becoming toxic.

Many companies went into this episode highly leveraged. They took advantage of low interest rates to issue debts, often for stock buybacks to engineer earnings per share growth.

Corporate debt levels, especially in the near junk bond BBB space, exploded over the last decade. The volume of worldwide corporate debt hit an all-time high of $13.5 trillion at the end of 2019.

But the overall quality of bonds fell below levels seen before the global financial crisis with 51% of all new investment-grade bonds rated BBB, the lowest investment grade rating available.

This high degree of corporate leverage complicates the revenue losses occurring. Even with a mild downturn, we would expect to see over a trillion dollars of investment-grade debt downgraded to below investment grade or “junk”, and we will almost certainly see corporate default rates in this downturn that are higher than the 2008 financial crisis.

Lending these companies more money will only compound the long-run problem resulting from over-leverage and make the companies even more vulnerable to failure in the long run.

Given the effective shut down of our economy, shopping malls and others in commercial real estate will be forced to default on many of these loans.

The underlying household economics today aren’t really much different than they were prior to the Great Recession, but the economic sudden shocks are much worse.

As more people lose their jobs due to business failures and general contraction, the consumer market will inevitably begin to foreclose on residential mortgages. Economists from Moody’s Analytics predict as many as 30% of Americans with home loans – about 15 million households –- could stop paying if the U.S. economy remains closed through the summer or beyond.

As we saw in The Great Recession, a few foreclosures can have a cascading effect driving down prices for whole neighborhoods, putting homeowners underwater and causing more foreclosures.

According to a recent Experian report, vehicle loans and leases outstanding have soared to a record high of $1.3 trillion and auto loan balances have grown by 81% since 2009.

Meanwhile, auto loan delinquencies reached an all-time record of $62 billion ten years later in 2019 Q3 according to data from New York Fed. Delinquent loans were at 4.71% of outstanding auto loans in a period of record unemployment lows.

These delinquency rates are comparable to the level ten years prior — in the aftermath of the 2008 crash.

The vast majority of these delinquent auto loans are “subprime” with about 22% of all auto loans categorized as subprime. Many of these subprime auto loans have been packaged by banks, similar to what was done with subprime mortgages in the years leading up to the housing crash.

We can be pretty sure that auto loan delinquency rates are going to soar in 2020, putting further strain on the financial system.

If you look back at the New York Time’s front-page headlines from October 30th, 1929, they include the phrase “Bankers Optimistic”. On that day of optimism, the Great Depression still had ten years to run. 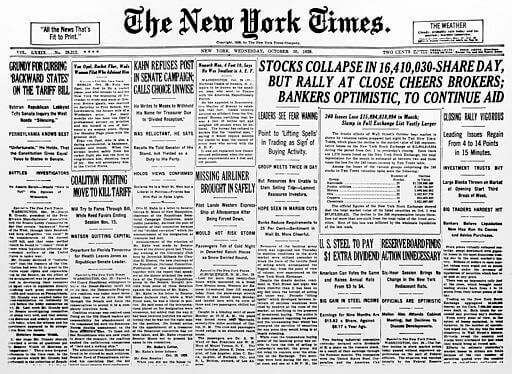 The optimist’s view is built around the early cessation of bad news and the arrival of better news soon.

This is a story of cascading recessionary effects across both supply and demand and the feedback loop that comes from that.

As the dominos start falling, we could quickly end up in another full-blown financial crisis.

At this point, it’s not outlandish to suggest the coronavirus outbreak could end up triggering a recession to rival The Great Depression. The economic challenges we are currently experiencing with COVID-19 are unprecedented.

If you are dealing with the fear of missing out on a market bottom and you are itching to buy into the stock market, it might be helpful to take a look at what the current DJIA performance trend looks like when compared to the market crash of 1929, which preceded The Great Depression.

If this is the beginning of a bear market and we are already in a recession, what can we expect? Nobody can predict for certain how long a recession will last or the losses it will inflict on the market. The table below provides some key S&P performance metrics for nine historical bear markets starting from the Great Depression down to the Great Recession.

What is a bear market? A bear market is traditionally defined as in which the major stock indexes, such as the DJIA and the S&P 500 drop by 20% or more from a recent high point and remain below that level for at least a few months.

The government is narrowing into its solution which is unlimited money printing. The president himself has stated “This is the United States government. You never have to default because you print the money”.

We will get back to a better place after a lot of sacrifices, but we may never get back to normal.

In the meantime, remember the number one rule for recessions: cash is king.