Black swan events in the stock market are unexpected events that can have catastrophic consequences. At the time, black swan events are considered complete outliers, but they become more clear when people observe them in hindsight. Black swan events, such as the 2008 U.S. financial crisis, come as a surprise, and thus the markets and their respective government regulators are usually wholly unprepared for them.

The year was 1929, and this year was supposed to be the culmination of the Roaring ’20s. The United States had established itself as one of the major players, if not the most important player, in global politics and economics. The U.S. had surpassed the U.K. in the late 19th century to boast the biggest economy in the world. Furthermore, Europe, having been completely ravaged by World War I, left the U.S. in an enviable position.

However, most people know how the year 1929 ended. The stock market crashed on October 29, 1929, sending the U.S. into the Great Depression. No one knew the stock market could and would crash and were woefully unprepared to deal with the consequences. This type of outlier event in financial markets is called a black swan event, and such events have huge consequences.

What is a black swan event?

The term “black swan event” comes from the idea that people used to use “black swan” to mean something impossible until they learned that black swans really do exist. Finance professor and former Wall Street trader Nassim Nicholas Taleb popularized the term more recently with his 2007 book, “The Black Swan: The Impact of the Highly Improbable.” Black Swan events have three overarching qualities: they are completely unexpected, they have a large impact, and only in hindsight are they truly dubbed black swan events.

As they are beyond the realm of what people consider normal behavior in the markets, the consequences can be significant, both positive and negative. For example, the 1929 stock market crash led to the eventual New Deal and some of the most important social programs in U.S. history. On the other hand, many scholars argue that its financial impact on Europe led to the rise of the Third Reich. Either way you shake it, when looking back at the story of human civilization, notable black swan events are some of the most consequential events in history.

What makes up a black swan event?

One of the key characteristics of a black swan event is that you don’t know you are in the middle of one when it’s happening. Only in retrospect can you calculate all the variables and elements to define it as a black swan. These events are generally considered to be unpredictable, although many people try to predict them.

Need an investment strategy that will carry you through the next black swan event? These advisors can help.

There are several black swan events throughout history, but we will stick to the relatively modern age. Here are some examples you may or may not have heard about.

In 2006, the housing market had been absolutely booming for the better part of a decade, but it had begun to show cracks. In hindsight, one of the precursors to the crisis could be the Financial Modernization Act of 1999. It allowed banks to use customer deposits to purchase mortgage securities and their derivatives. This activity was so profitable that banks and financial institutions continued to invest in the securities and derivates, even though the underlying assets (the housing market) were showing signs of trouble. The crisis peaked with the fall of Lehman Brothers in September 2008, leading to a full-fledged housing market crash.

The 2008 financial crisis had widespread negative consequences, such as people losing their homes in droves as well as the stock market taking an absolute battering. However, it did lead to positive regulation in terms of mitigating banks’ risky behavior. The Dodd-Frank Act is an example of this regulation, as well as banks offering more fixed APRs rather than floating rates as they had before. As the financial crisis spread to affect the global economy, China injected an unprecedented nearly $600 billion of stimulus money geared toward infrastructure. It took the country from one with minimal debt to having one of the largest debt loads in the world, which they still deal with today.

In the early 1990s, if you were to attend a Davos Summit, everyone was raving about the Asian tigers and the prospect of an Asian-centered world, at least in terms of exporting and manufacturing. This all changed in 1997 when the Thai government decided to unpeg the Thai bhat and float it due to a lack of foreign currency reserves. This led to a collapse of multiple Asian currencies and an exodus of foreign capital from the Asian market. The Indonesian rupee, for example, fell 83% vs. the U.S. dollar, and thus capital continued to flow outward. 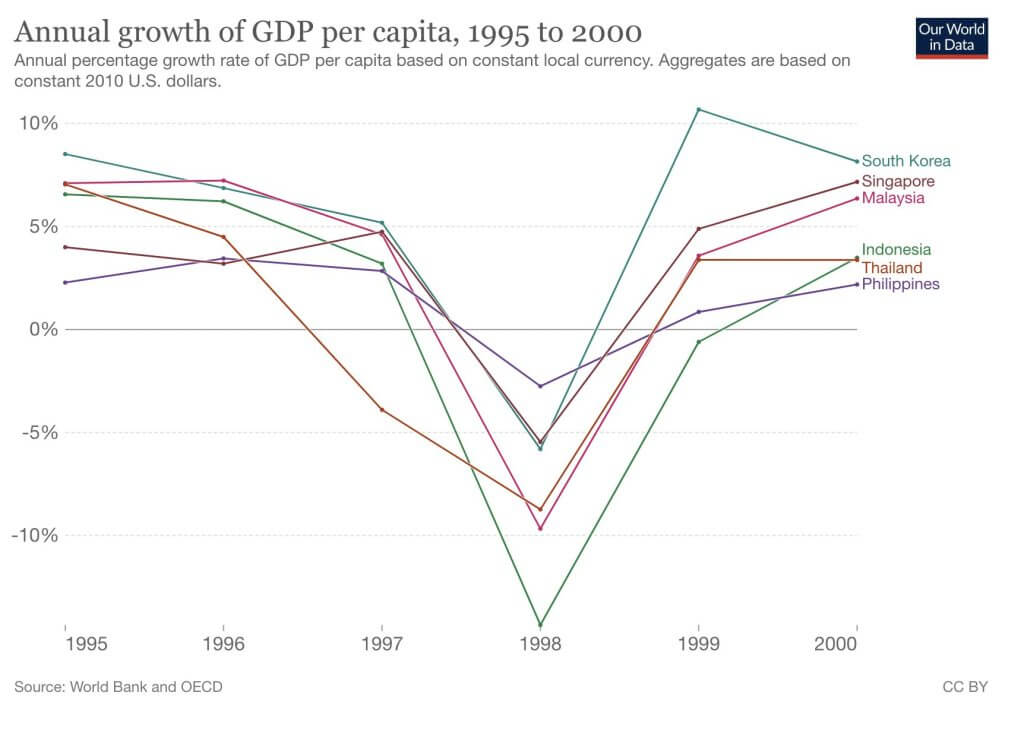 Many people in Asia lost absolutely everything, many through bankruptcies and foreclosures. When the financial crisis happened, it became clear that intra-governmental regulatory bodies such as ASEAN (The Association of Southeast Asian Nations) were effectively broken. This led to greater regional cooperation in southeast Asia in terms of financial regulation and monetary policy. As China was relatively closed off at the time, it was not greatly affected by the Asian financial crisis, or AFC. This led to a change in power dynamics in Asia after the AFC when China began to swing its weight economically.

Stock market crash of 1929 and the Great Depression

Even though the Great Depression is one of the most famous events in history, its exact cause of it is still relatively unclear. Once the stock market crashed in October of 1929, there was a huge loss of investor and consumer confidence. This led to a deflationary spiral in which people were reluctant to spend, thus creating a feedback cycle of lower and lower prices. Some scholars believe that the peg to gold was a large reason that the economy could not recover in time. Regardless of the cause, the consequences were severe.

The Great Depression led to nearly 25% unemployment at its peak in 1933. The extremely poor social conditions in the U.S precipitated some of the most important social programs in history, such as the New Deal and Social Security. Furthermore, it led to some of the most important regulations to date, such as the FDIC, which protects your bank accounts. However, the Great Depression had far-reaching consequences, especially in Europe. Many scholars agree that its effect on Germany’s Weimar Republic, which was already struggling with reparations payments, was a direct cause of the rise of Hitler and the Third Reich.

Some might say that the detrimental effects of the 2008 financial crisis were a predecessor to the Brexit vote. Regardless, the rise of the populist right under the UKIP (U.K. Independence Party) banner presented a problem for the Tories and threatened to split the party between those that were for and against the European Union. To placate this populist right-wing dynamic, British Prime Minister David Cameron scheduled an official referendum for Brexit that took place in 2016. Many never expected there to be a leave vote, as the U.K. would be the first European country to do so. The vote to leave the EU was confirmed in June 2016, and the consequences of that vote continue to reverberate on the global stage to this day.

The GBP, or British pound sterling, tumbled to one of its lowest points in history after the Brexit vote, and the markets dipped with it. Although many debate its true effect, financial institutions that had their headquarters in London started to shift operations to other cities, such as Frankfurt. The pound never recovered, and the U.K. has been in a general economic malaise ever since.

When was the last black swan in the stock market?

The last black swan event in the stock market is the COVID outbreak of 2020. However, the 2022 invasion of Ukraine could also be seen as a black swan event. Hindsight is still developing on that event.

What is a black swan strategy?

As black swans happen unexpectedly, one strategy is to have portions of your investments allocated to safe bets like CDs and bond. So in times of market turmoil, like black swan events, you will have some stability.

Why is it called a black swan event?

These events are called a black swan events because people used to believe black swans were impossible until they found out that they did exist. Once you realize something you once thought impossible is possible, you can sometimes see it more clearly.