Economies typically behave in cycles of growth (expand) and recession (contract). Cyclical unemployment is the correlation between the unemployment rate and the state of the business cycle. For example, if a country is expanding and experiencing high GDP growth, unemployment should be trending downwards. In contrast, if an economy is shrinking or in a recession, the unemployment rate trends upwards. In downcycles, the goal of any country’s economic policy is to stimulate growth and lessen unemployment.

Cyclical unemployment is a normal part of any recession. Consumer demand for goods falls, which causes jobs related to the service and production of those goods to fall. This leads to jobs being cut, which then affects the spending ability of those who become unemployed. 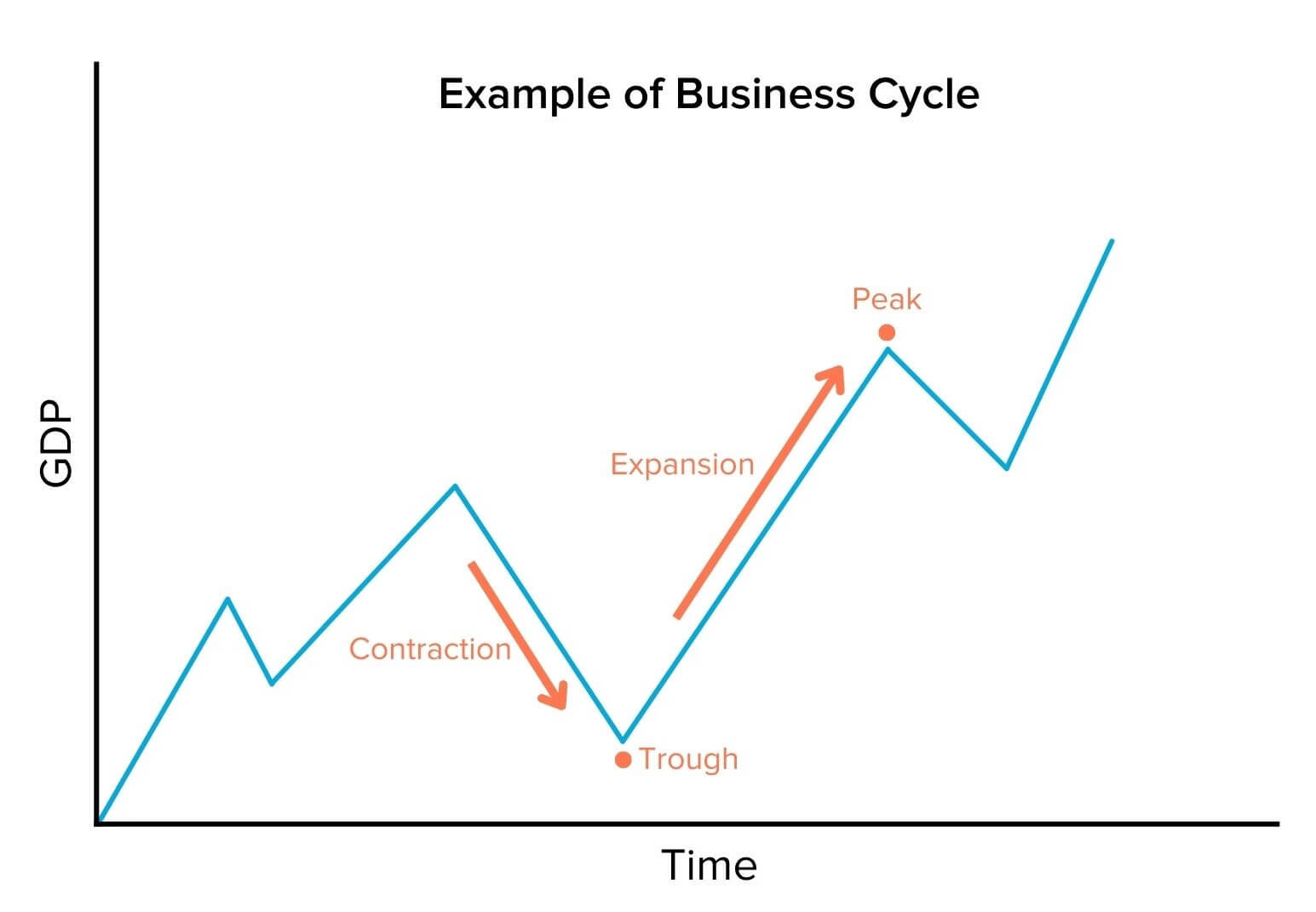 During a time of high economic activity (expanding towards a peak), business revenue increases and so does the size of the company’s labor force. When the economy is headed towards a trough, businesses see a decrease in revenue, and unemployment rises.

For example, let’s say that something occurred, such as the 2008 financial crisis or the dot com bubble, which contributed to a recession in the early 2000s. Perhaps you worked in the tech industry and were fired from your job in the early 2000s. Every week you would buy an Awesome Blossom for lunch at a local Chili’s down the street.

Now that you have no income, you decide to cut the Friday onion flower out of your routine. If you are having trouble paying for this delectable treat, then so are others. Due to the lack of Awesome Blossom sales, Chili’s experiences a lack of incoming cash flow. This means that in order to survive, Chili’s needs to shed jobs. The people who lost their jobs will not have the spending power to buy their usual goods, and so on. Thus, you can see the knock-on effect of a cyclical downturn and how that results in downward cyclical unemployment.

Another example of cyclical unemployment occurred in 2008 when the housing bubble burst. Since fewer and fewer people could make their mortgage payments during this time, demand for construction fell significantly. When financial institutions foreclosed on thousands of homes because of unpaid debts, the demand for new construction fell even further.

As you can see, the GDP reduction rate substantially corresponds to the reduction in the unemployment rate. If a country’s GDP is forecasted to go one way or another, you can determine what the future employment situation will look like.

Keynesian economics was developed by John Maynard Keynes in the early 20th century. It was one of the major tools used in ending the Great Depression, although this is debated. The philosophy revolves around the idea that increasing demand on an aggregate scale is the most important facet when looking at turning around an economy.

As governments understand the business cycle and the aggregate effects of a downturn, their main goal is to mitigate the unemployment increase that will be tied to any sort of downturn. This means that they will attempt to use government policy to help shorten the recession and get people back to work. The utilization of Keynesian economic theory, to help shorten and lessen the effects of a downturn, is among the most widely used by governments around the world. This has been the weapon of choice to combat cyclical unemployment.

By lowering interest rates, you are encouraging people or companies to borrow cheaply and spend or invest the funds. By doing this, you are injecting money back into the economy to increase demand.

Governments will inject money into an economy to stimulate it in the name of growth, and to counteract downward cyclical trends. When a government invests money in, say, infrastructure, this will automatically create jobs for people building said infrastructure.

Structural unemployment is caused by fundamental changes that might reorganize an economy. Typically, this happens when people lack the skills to deal with changes in technology.

For instance, back when people drove horse carriages around, there were many jobs related to horses and carriage maintenance. After the invention of the automobile, those people’s skills were no longer needed. Thus, they are victims of structural unemployment.

Seasonal unemployment is related to a change in season that might affect an industry. The ski industry in North America is a great example.

The mountains of Colorado are packed with employees from all around both the country and the globe. When the season turns to spring and summer, many of those jobs are no longer required. In that case, unemployment typically rises in this industry.

Frictional unemployment is the inevitable period of unemployment that people experience when they are transitioning from one job to another. This can be considered a good trend because it means people are probably transitioning to better jobs.

Institutional unemployment is caused by a third party or institution, including some governments. If, for example, the government of the Dominican Republic was to force the cultivation of bananas, everyone in the banana industry would become unemployed.