A falling wedge trading pattern shows both the support and resistance lines sloping downward, but the resistance line slopes down at a greater angle than the bottom support line. The pattern is generally considered bullish and can be a market continuation or reversal pattern. The wedge represents a narrowing or consolidation of the price before a break to the upside.

Often, when people start out trading, they will have a general intuition about which direction the price of an asset might be headed. Lines that slope downward typically mean a bearish trend, and lines that slope upward typically mean a bullish trend. However, when looking to spot the patterns within patterns in trading, sometimes the shape of the patterns might seem counterintuitive. In the case of a falling wedge, both lines slope down, so people assume this pattern indicates a bearish bias. But it does NOT. Falling wedges generally assume a bullish break once the asset price breaks out of the wedge pattern.

What is a falling wedge? 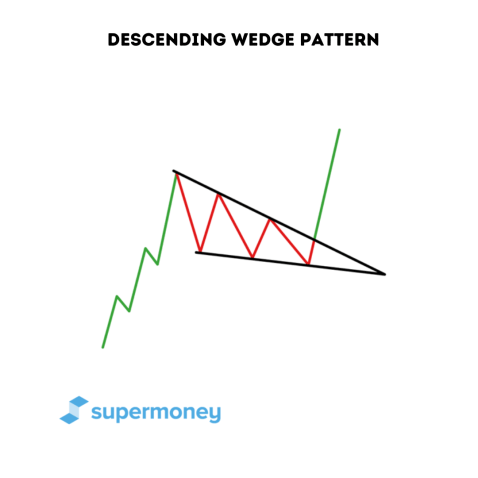 A falling wedge chart pattern consists of both the top resistance line and the bottom support line sloping downward. However, the slope of the line of resistance at the top will be at a sharper downward angle than the support line at the bottom. In most cases, a falling wedge pattern signals the reversal of a previous trend, although it can also be a continuation pattern in some cases. Unlike a rising wedge pattern, a falling wedge pattern is typically considered a bullish trend.
In the trading battle between buyers and sellers, the falling wedge indicates a period of time when the buyers are gathering strength and waiting to make a push to the upside. Momentum is running out for the sellers (bears), and thus the bottom support line is indeed affected by its downward trajectory. But not as much as if the sellers had a significant advantage.

A falling wedge can be part of a general market reversal and a continuation trend. In the case of a reversal trend, the wedge will start to form at the bottom point of a bearish trend in the market. Once the wedge lines converge and begin reaching their apex or possible convergence point, there should be a break to the upside.

What makes up a falling wedge pattern?

Although wedges look like triangles, there are differences. Unlike triangles, which consist of either the top line or bottom line being horizontal or both being equally symmetrical, wedges follow a different path of unequal sloping lines. In the case of a falling wedge, the two trend lines will slope, but the top line will slope at a sharper angle downward than the bottom resistance line. Falling wedge patterns should also be used in combination with other forms of technical analysis and due diligence. Here is what needs to be present when looking for a falling wedge pattern.

Consolidation occurs when the market is trading within a range but hasn’t broken out significantly in either direction. This is caused by traders being indecisive with their trades, whether buying or selling. However, in this consolidation time frame, small patterns can emerge that indicate a significant breakout in one direction or another.

A falling wedge pattern will consist of a downward slope on the support level that is not as steep as the downward slope of the resistance level. According to most trading textbooks, this represents a consolidation for the buyers and a loss of momentum for the sellers. Although the sellers will try to push through the support line, they aren’t able to make a clean break. Thus, they are being pushed back by the buyers at progressively smaller low points.

Looking to learn how to trade or start trading yourself? These brokerages can help get you started.

The pattern should hit at least two low points and two high points to be considered a pattern. That being said, many traders would consider it safe to include multiple points (three to five) before declaring it a pattern inside the two converging trend lines.

Breakout to the upside

The breakout can occur when the two lines converge around the apex point. The asset price should break to the upside at or near the convergence point.

Why does a falling wedge pattern occur?

Falling wedge in a reversal trend

In many cases, a falling wedge pattern is a reversal pattern after a downward trend. In a significant downward trend, there is momentum on the seller’s side that pushes the lows down lower and lower. However, when the wedge pattern occurs, this bottom support line’s drops become smaller. Most traders will tell you that this is a consolidation phase when the buyers are gaining strength. After a long downward trend, the market needs time to settle down through consolidation. If the downward trend were to continue in the same manner, then the sellers would be able to push the price down even further.

Falling wedge in a continuation trend

Sometimes, a falling wedge can be part of a continuation trend. It just represents a pattern within a pattern of the overall uptrend. The reason for a falling wedge being present in an uptrend is that it represents a brief market contraction for various reasons. Once the pattern reaches or is near its convergence point, the asset price will break to the upside and continue its uptrend march. Many traders who can spot a falling wedge in an uptrend will feel that this gives them buying opportunities they might not have had in a general uptrend.

Why does a falling wedge break to the upside?

A break to the upside typically happens in a falling wedge scenario once the two lines reach their convergence or apex points. The seller’s momentum has become tired, as they keep trying to push the price down but are met with earlier resistance than normal from the buyers. Rather than the buyers waiting until the price drops significantly, they buy at an early price/time. As the two lines begin to converge, the volume will also decrease until it reaches a breaking point, in which the asset price will break to the upside.

Think of it as a battle where the offensive push by the sellers isn’t quite breaking through where they want, and they are growing tired. The buyers have been biding their time, and once the shape becomes smaller, they are ready to make a push to the upside.

One of the characteristics of a falling wedge is that volume will be low until the breakout point, in which volume should significantly increase as buyers jump in to confirm their bullish trading theses. If traders see what looks to be a falling wedge pattern but it cannot be 100% confirmed, then the volume is one of the best ways to measure if a falling edge pattern is really forming and possibly about to break. Remember, the volume drops during the formation of the falling wedge pattern because sellers are growing tired. The bulls support the price as best they can, but as the lines converge, they will be ready to make a break to the upside, and volume will increase.

Let’s review how traders would respond to a falling wedge pattern.

When would traders open a trade?

This gives the opportunity to see if there is a pullback or retest of the resistance (now support line) that would indicate if the asset price has truly broken out of the wedge pattern in a significant way. Falling wedges are fairly difficult patterns to truly identify in trading. This is why some traders advise waiting until after the breakout point and buying on the pullback and retest to be confident that this is truly a legitimate upside breakout. Traders would then recommend not to buy on either end of the candlesticks that break out. Instead, wait until further candlesticks occur supporting your trading thesis before making a move to open a trade.

On the other hand, when falling wedges do finally break the pattern, they tend to accelerate at a faster speed than other patterns.

Looking for an advisor to help grow your stock portfolio along with trading? Here are some investment advisors who can help.

How traders manage the downside

It depends on their trading philosophy regarding the asset and when they execute the trade with a bullish thesis. If they bought right at the breakout of the asset price, many traders will want to put a stop loss right below the bottom of the top line that made up the wedge.

Traders who took a more conservative approach and decided to wait and see how significant the break is may consider putting the stop loss at the “new support.” As the asset price has now broken out of the pattern, there are new resistance and support levels.

Is a descending wedge bullish?

A falling wedge or descending wedge pattern is usually considered a bullish pattern.

What is a descending wedge pattern?

A descending wedge pattern consists of two converging downward trend lines. The top line of resistance slopes downward at an angle greater than the downward slope of the supporting trend line.

Can a descending wedge be bearish?

Typically, no. A descending wedge line is usually a bullish signal. Rising wedges are typically more indicative of a bearish chart pattern.

Is a descending triangle bullish or bearish?

Is a descending channel bullish or bearish?

It depends on the timing. In the short term, descending channels are more likely than not bearish. In the long term, however, they can indicate bullishness.