Think you know about debt? We like to think that there are three kinds: good, bad, and ugly debt. We love good debt, but it’s become a habit to also fall in love with temporary, luxury, or otherwise bad debt. Then our bad debt has a way of encouraging even worse, or ugly debt that’s harder to pay off and benefits no one but the lender.

Debt is like cholesterol. There’s a good kind and a bad kind. Knowing the difference—and managing both wisely—is the key to financial well-being. — Suze Orman

…is still debt. It needs to be paid off, but acquiring it increases your net worth, makes you richer in the long run, and helps you to be more financially prepared in case of emergencies. We all know that a mortgage on a home is the good kind of debt because real estate usually rises in value over time.

Student loan debt also fall into this category because it is seen as an investment in the future–a college graduate has the potential to earn much more than someone with just a high school diploma.

Borrowing money to start a business is also considered investing in your future worth, as well as taking out a loan to improve and protect your assets. Using the money to winterize your home, for example, will save you money on utilities and updates later on.

How can good debt go bad? Even if you only have good debt, you can still have too much of it. If you’re putting more than 36% of your income in paying off debt, you’re in trouble. If you’ll be in debt well into your retirement years, you might want to rethink what you’ve taken on and cut back. Moreover, if you aren’t taking advantage of tax breaks associated with your debt, like greening your home with a renewable energy system, that money is going to waste as if it were bad debt.

…is worse debt, usually wrapped up in a bow of temporary wants, without any benefit to your overall net worth or financial future. You might think that owning a new car is a good thing, or that “investing” in a new leather interior or sound system will work out in your favor, but finance experts see cars for what they really are–money pits. 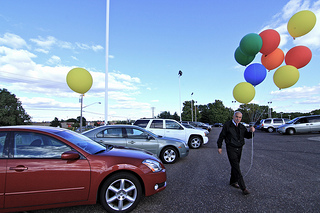 Credit card debt or loans used to pay for items that depreciate in value, like fancy electronics or entertainment, is what most of us are used to racking up without question. We’re trained, from our first credit line at our favorite store that “just pay it off later” means that we can afford stuff, even if you can’t really afford it now. Luxury purchases might make you look richer, but wont actually make you any richer in the long run.

How can bad debt be good? If you can turn a temporary want into something you can use to benefit your finances in the long run, it can be called good debt. Taking out a loan for a new car is never a good idea, but taking on a small amount of debt on a quality used car that you can and do pay off within 3 years or less is good. It’ll help your credit history, and unlike many people on the road, you’ll be driving around a car that’s paid off and not draining your income. Use the car for work? It’s also seen as an asset, and some of the expense can be written off come tax time.

…is worse than bad debt because it’s more damaging to your net worth than any other kind. It’s so temporary and so harmful to most budgets, that it’s a shame people still think it’s a viable option when dealing with their money, or lack of it.

Gambling debt: Taking a trip to Vegas and blowing all the money in your wallet might be rite of passage, and a whole lot of fun, but most people don’t stop there. They’ll illegally take cash advances on their credit cards, or even take out small loans for the chance at getting lucky. It’s a million in one chance that a bet on credit wont amount to anything more than quick debt and a string of problems at home.

Payday loans: Taking on debt always starts off the same way–oh, I’ll pay it right off! I’ll have the money next week! I just need a little help! Unless the situation is extremely dire, and you’re on top of your finances and can afford it, avoid payday loans at all costs. These have terrible interest rates and fees, so even if you can get an advance on your paycheck and pay it off right on time, you’ll likely find yourself paying around 390% in fees just for walking in the door.

Tax refund loan: You just finished your taxes, and are about to click send. What’s this? You can get that hefty tax refund deposited immediately into your bank account. Awesome, right? Wrong. Not only are there fees galore, but you’ll be paying money… to get your own money. Not only that, with technology nowadays, the average tax refund when e-filing already arrives pretty fast, usually after a week or two at most.

Rent-to-own: Want a new TV? How about a brand new living and dining set? The ad says there’ll be “no” interest, and you’ll only have to pay a small amount per month. For the next several years, you’ll be paying on that “deal” and by the time it’s paid in full and it’s really yours, it’ll likely be outdated. You’ll also have spent drastically more than if you’d simply saved up and bought it from a retail store.

Any form of debt that has you spending money on things you can’t afford and don’t need is pretty ugly, but those four are by far some of the worst. It’s almost always the case that they won’t work out to your benefit, and you’ll be the loser in the end.

Taking on debt can be a good tool for building credit and net worth, but it can easily turn into a string of poor choices. For the personal finance savvy, every decision about money is used to promote future wealth and security. Before signing your name on a new loan or credit card, think about what it benefits: your now, or your future.

Brenda Harjala is a personal finance writer at SuperMoney. She specializes in personal finance topics such as budgeting and money management. Brenda has a B.A. in Scientific and Technical Communication from Michigan Technical University.