A company owns another company that loaned money to another company, then loaned it to another company they owned. Although this sounds overly complicated, these types of corporate structures are prevalent throughout the business world. You might be surprised that when you do a little bit of research on the products you buy, their ownership structures reveal a tangled web of companies and their respective holding companies.

Although these types of structures might seem like they just create more paperwork, corporate structures in the U.S. economic system are vital to companies being able to manage risk, diversify their business, and raise money. A bank holding company, or BHC, is a common phenomenon in the world of banking. Bank holding companies act as corporate entities that control the overall strategy and staffing of a subsidiary bank on a macro level. BHCs are also able to increase their subsidiary banks’ capital positions and diversify the overall risk.

Why set up a holding company?

Holding companies are set up in order to gain tax efficiencies, diversify/minimize risk, and raise and allocate capital properly. Holding companies do not produce goods and services and rarely have a hand in the day-to-day operations of subsidiary companies. Instead, holding companies have the power to control the management and strategy of the subsidiaries. Holding companies also allow companies to take part in legal financial engineering to mitigate their tax burden.

One of the most famous holding companies in the world is Warren Buffet’s, Berkshire Hathaway. Berkshire Hathaway is not a company that produces goods and products itself but instead owns a slew of interests in businesses spread out over a variety of sectors.

You can see how Berkshire Hathaway is at the center of a complicated web of subsidiaries in the graph below. 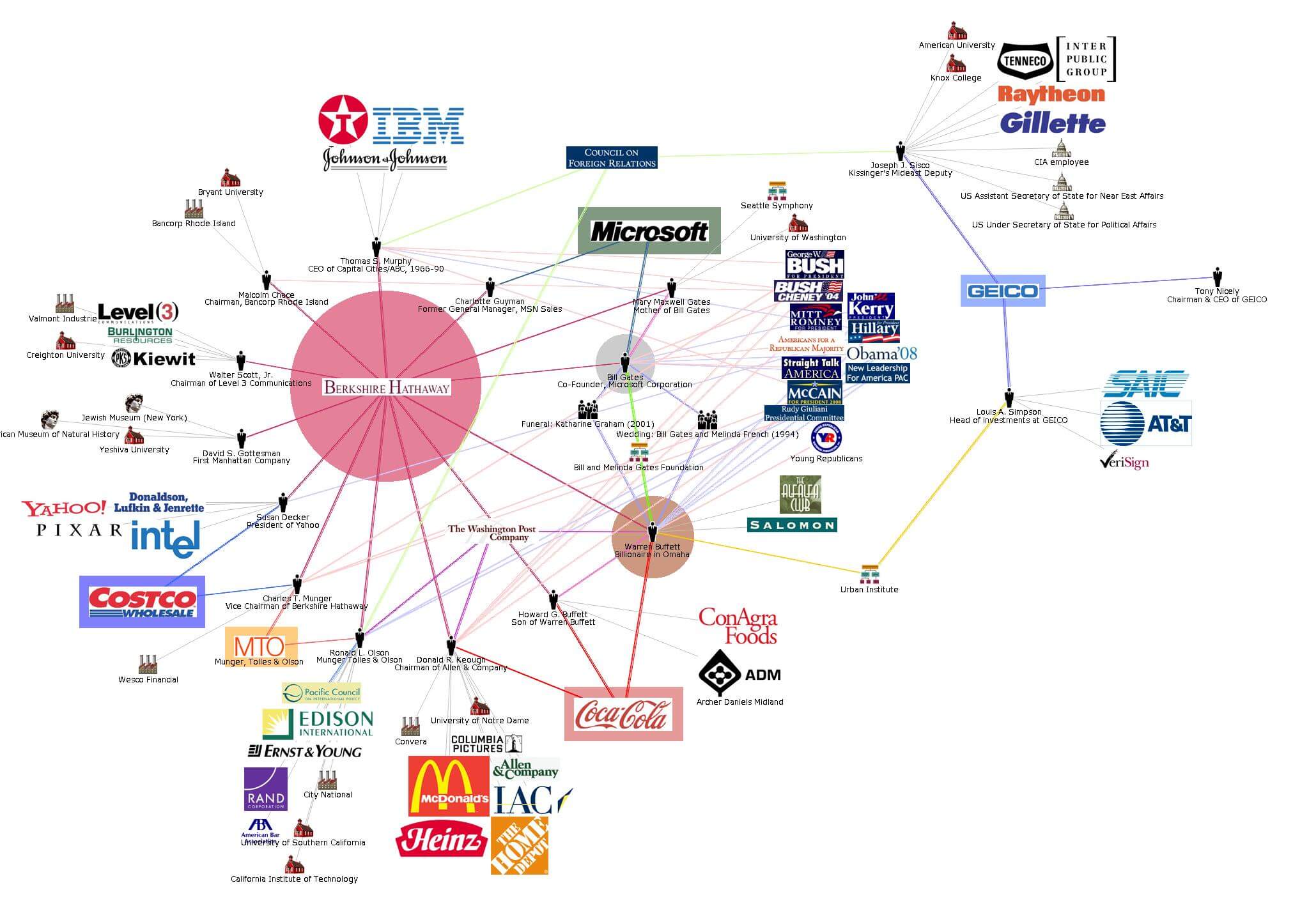 Why do banks use BHCs?

Banks will choose to incorporate into a BHC for a variety of reasons:

A BHC is able to diversify risk by spreading out its debt and liabilities over a number of different subsidiaries. For instance, a BHC might have unstable subsidiaries that, if a parent company did not own them, would surely fail. A BHC will be able to take some of that specific toxic asset risk and diversify it throughout the portfolio.

A BHC can also significantly increase access to capital. For example, a BHC can acquire other financial entities and have access to their capital. Furthermore, a BHC can raise money from its successful assets and use it to assist companies that might be struggling under its umbrella.

When companies want to release reports, raise money, or even want to return money to shareholders, a BHC offers more flexibility. With a BHC, you can move different assets and liabilities around to give a stronger picture of a BHC’s financial health.

Businesses and corporations will often structure their assets and liabilities to mitigate their tax burden. Done smartly, a BHC structured the right way can greatly reduce tax liability on both a federal and state level in the U.S.

Various regulations have been enacted throughout the last 100 years, particularly after the Great Depression, that regulate what a bank can do. This includes capital reserves, trading activities, and debt liabilities. BHCs will allow a corporate entity to circumvent or mitigate some rules and restrictions that are brought to bear by the Federal Reserve or Securities and Exchange Commission.

Many BHCs have been formed to issue capital instruments not deemed capital instruments for banks and greater overall corporate and operational flexibility. In 1980, the Federal Reserve Board released the “Small BHC Policy Statement.” This allowed BHCs to acquire various forms of debt, both unsecured and secured, to allow for questions or stock repurchases.

The Dodd-Frank Act of 2010 constricted some of the activities that a BHC can partake in. One of the reasons for this is that BHCs were issuing certain capital instruments that traditional banks refrained from issuing. The regulations now restrict these practices, and there have not been any new permissible BHC-approved activities since the passage of Dodd-Frank in 2010.

BHCs and the 2008 financial crisis

During the 2008 financial crisis, all of the major banks in the United States were asked to take on significant debt from the government, whether they wanted to or not. Goldman Sachs and Morgan Stanley, for example, were two investment banks that did not partake in traditional banking services. One of the main reasons for this was that GS and MS did not want the higher capital requirements and business restrictions that come with traditional banking.

Goldman Sachs and Morgan Stanley decided to convert their business into BCHs, which would give them some advantages and disadvantages. On the downside, they would be subjected to more oversight from the Federal Reserve, particularly in regarding the Federal Deposit Insurance Corporation (FDIC) and clients’ money. On the upside, they were able to borrow directly from the Federal Reserve. The attitude of the banks at the time was that the regulations were surely going to get stricter after the financial crisis for non-BCH companies. And therefore the risk/reward ratio for not turning into a BHC didn’t make as much sense.

How to invest in BHCs and other major companies

What is the benefit of a bank holding company?

A bank holding company structure can help diversify risk and raise capital. Companies also utilize them for legal financial engineering and to move assets and liabilities around. They can also help mitigate taxes and open up paths to other non-banking-related activities.

They can make money in a variety of ways. A bank holding company can earn money via its subsidiaries, and from assets, royalties, or leasing/loaning assets to third parties or subsidiaries.

What is the largest bank holding company?

What percentage of banks have holding companies?

According to the federal reserve, 80% of commercial banks in the United States are under a BHC organizational structure.