Why do people have babies? Is it love, a biological imperative, because they’re cute, insurance for old age or to fulfill social expectations? Is there a relationship between your tax bracket and the likelihood you will choose to have babies? These are interesting questions since fertility rates are dropping in developed countries at an alarmingly high rate. In 2016, the United States birth rate was 62.0 births per 1,000 women aged 15–44, a decline of 1% from the rate in 2015 (62.5) and a record low, according to CDC report.

Let’s explore some of the forces that drive us to (or not) make babies.

Around 37 percent of babies born in the United States are the product of unintended pregnancies. Despite millions of dollars invested in education, that ratio has not declined significantly since 1982.

Around 37 percent of babies born in the United States are the product of unintended pregnancies, according to research by the National Center for Health Statistics. Despite technological advances and millions of dollars invested in education, that ratio has not declined significantly since 1982.

Why Do People Have Babies?

What about the other 63 percent? Why make babies? This is an important question for developed countries that face the cost of an ever aging population. In the United States, the birth rate (per 1,000 people) has dropped from 16.7 in 1990 to 12.5 in 2014. 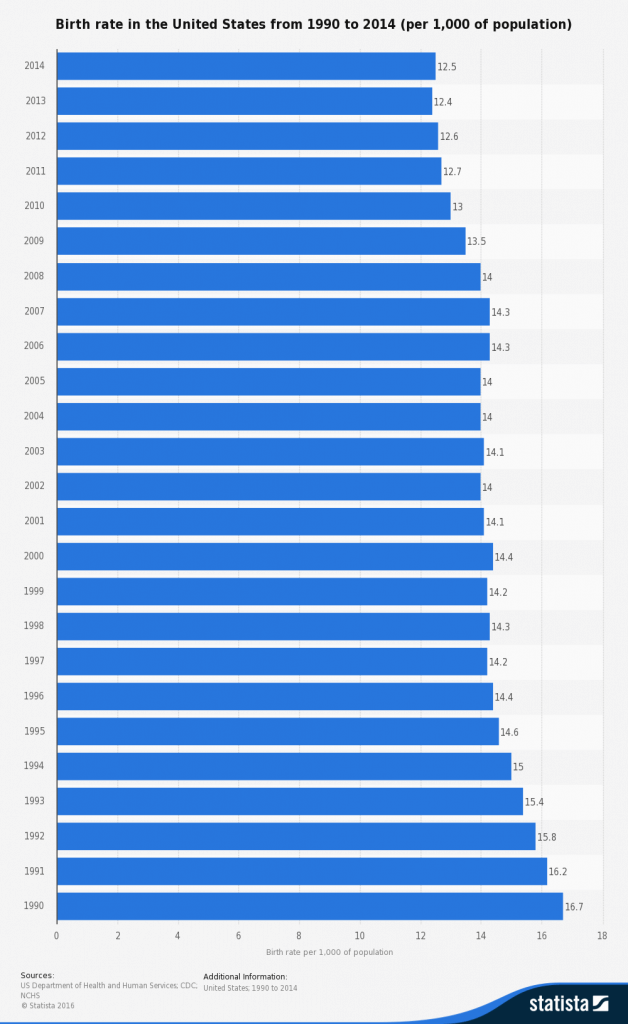 But low fertility is not just an issue for developed countries. Worldwide, birthrates are dropping and fast. Which begs the question of why people are choosing to have fewer babies, or, for that matter, why do they have them at all. Considering most of us are the result of a deliberate choice to get pregnant, you would think this is a fundamental question all parents could answer. However, it’s surprisingly tricky question to answer.

You may think one reason birth rates are dropping is that people are achieving higher levels of education, but the numbers show that birth rates are higher among mothers with a professional degree than high school dropouts. 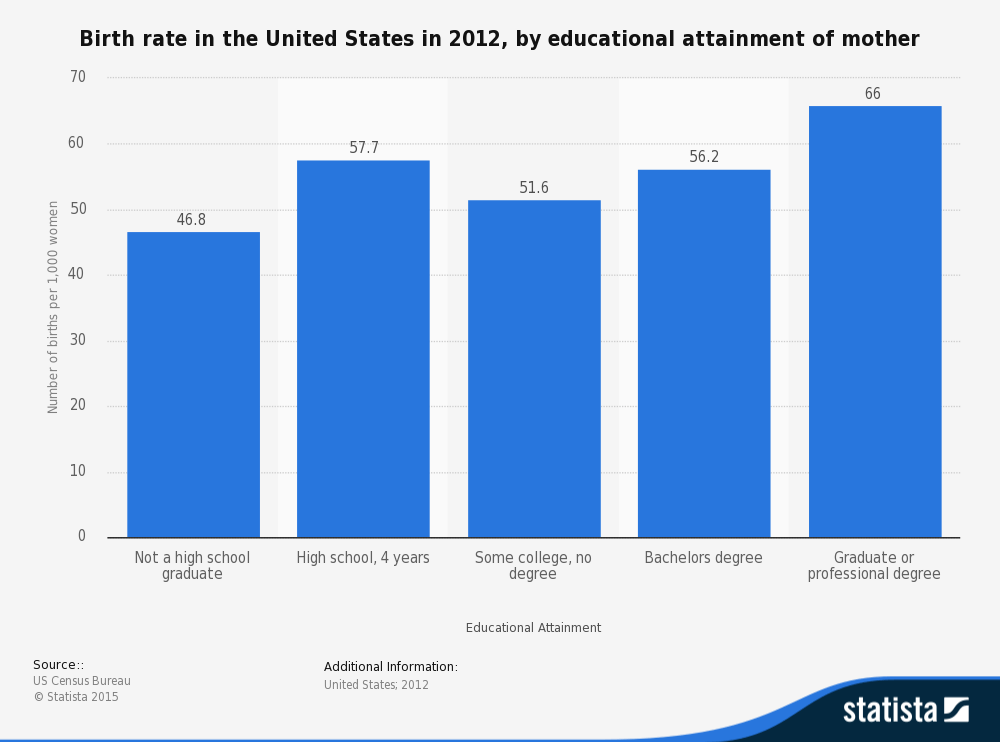 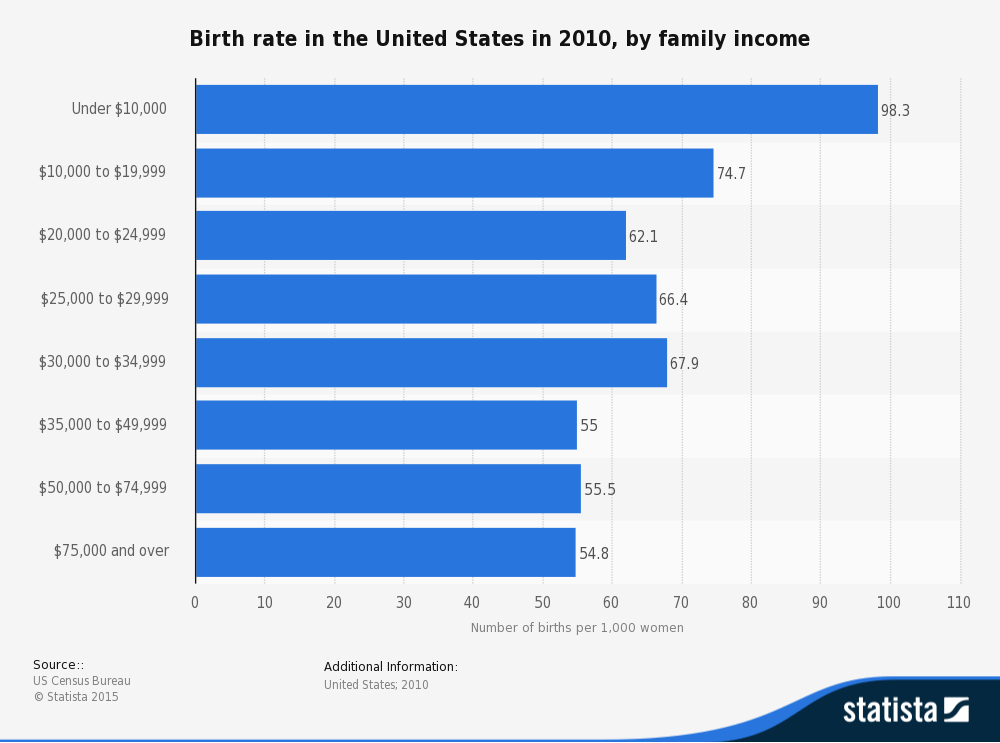 Is having babies only a biological imperative: a basic instinct, like breathing or eating? Apparently not for people who come from Japan, Cuba, Germany, Russia or Puerto Rico. All countries with a negative population growth rate, according to the CIA’s World Factbook.

The drop in Japan’s birth rate has been so sharp; the government of the third-largest economy has decided to get involved in what it has labeled a “critical situation.” How? By throwing money at it, of course. 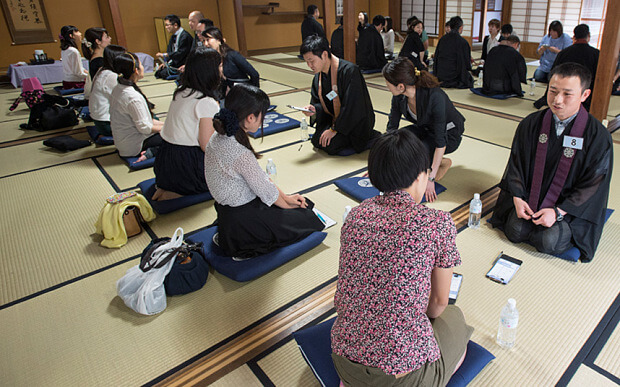 In 2015, the Japanese government allocated 3 billion yen (around $29.3 million) toward programs that fund matchmaking and speed dating services. The program also dishes out date vouchers for restaurants in the hope it will encourage young people to date, get married and–more to the point–have babies.

On the other hand, there are people who will use all their savings or even get loans to receive fertility treatment. If that is not an option, they will spend similar amounts to adopt a child. Some lenders, such as LightStream and Prosper market their personal loans directly to future parents.

So, although many people do feel strongly that they were made to have babies and have an unstoppable urge to perpetuate their imprint on the genetic pool, others just don’t. 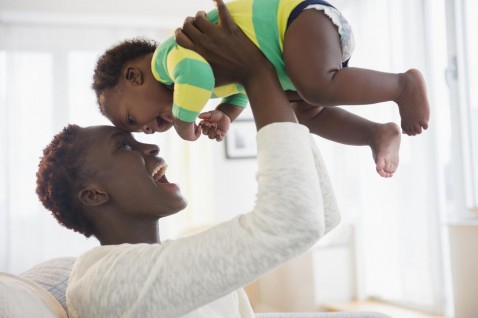 A big reason people have kids is because they think it will make them happy. Kids are fun. They’re cute. Maybe not at every moment, but overall parents like their children and get joy from playing with them, teaching them and spending time with them. Right? I don’t have kids yet, but I enjoy playing with them. My wife and I often babysit for friends, and we love it. So this reason resonates the most with me.

Or Do They Make Us Miserable?

However, you have probably read studies that show parents aren’t all that happy. In fact, several studies indicate that on average they are less happy than non-parents. The most famous of these studies was carried out in 2004 by Nobel-prize winning behavioral economist Daniel Kahneman, who surveyed 909 working women in Texas and found that child care ranked 16th in pleasurability out of 19 possible activities. Parents in the study obtained more pleasure from vacuuming (seriously?), doing the dishes, napping, and cooking than spending time with their children. The study also found that having children invariably reduced marital satisfaction.

A new study published in the journal Demography in 2015 makes the same point. Just more bluntly. Rachel Margolis and Mikko Myrskylä surveyed 2,016 Germans who didn’t have children and followed up on them 2 years after their first child was born. On average, the effect was devastating. Respondents rated their loss of happiness after a new baby as worse than divorce, unemployment or even the death of their partner.

It Is More Complicated Than That

The counterargument to these bleak studies is that parents may have negative emotions about certain aspects of parenting, but overall they obtain a sense of purpose, contentment, and fulfillment that makes them happy. Maybe Tolstoy had it right when he said “Happy families are all alike. Unhappy families have kids under five or teenagers” or words to that effect. Or is it simply a badly formulated question. Maybe “Do babies make you happy?” is not a very meaningful question, because the answer depends on the personality and circumstances of the parent and the child. For instance, a 2012 study published in the Social Indicators Research journal did find parents were on average slightly happier than non-parents. However, fathers who were working were always considerably happier. Working mothers, on the other hand, weren’t, and mothers’ happiness (working or otherwise) increased with household income.

Religion, tradition, and faith systems have a huge influence on fertility rates. Not surprisingly, the faith that has as its ultimate goal to attain serenity through Nirvana and avoid a cycle of suffering and rebirth has the lowest fertility rate. Some faiths, such as the Catholic faith, consider it a sin to use any type of contraception method — apart from abstinence. In other faiths, such as Islam, birth control may be permitted, but having large families is part and parcel of the overall culture and tradition of the majority of its members. 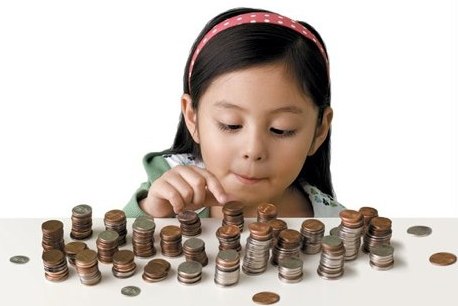 In many countries, financial security during old age is a huge incentive to have children. If you live in a country with no or little government-sponsored retirement income, adult males — who can earn an income when you no longer can — are the sentient equivalent of an IRA. Similarly, in countries, where most live on subsistence farming and where child labor is valuable, — and infant mortality rates are high — large families just make sense.

This reason doesn’t explain why wealthy people will go to great lengths to get pregnant in countries where children are an expensive commodity. However, it does shed light on why developing countries account for 97 percent of the world’s population growth and that fertility rates do tend to drop as incomes rise. 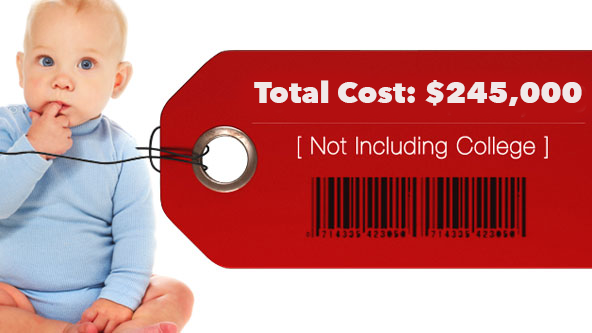 Parenthood is a divisive and controversial subject that can easily rile up people’s emotions, but something we can all agree on is that babies are expensive little critters. According to a report by the U.S. Department of Agriculture, a middle-income couple will spend just over $245,000 to raise a child born in 2013 to the age of 18.
Just prenatal care will cost and expecting mother $2,000 if she doesn’t have the right insurance. Uncomplicated vaginal births cost $9,600, and an uncomplicated cesarean section has an average price tag of $15,800. You can see why those baby personal loans are so popular.

The expense of parenthood is certainly a factor in the unprecedented drop in fertility. Europe is set to be the first region in history to experience long-term population decline because of low fertility in Russia and Eastern Europe. However, not all developed countries are facing population decline. France and Norway, which provide generous maternity leave and subsidies for child care, have managed to keep their total fertility rate close to the 2.1 required to maintain their populations stable. 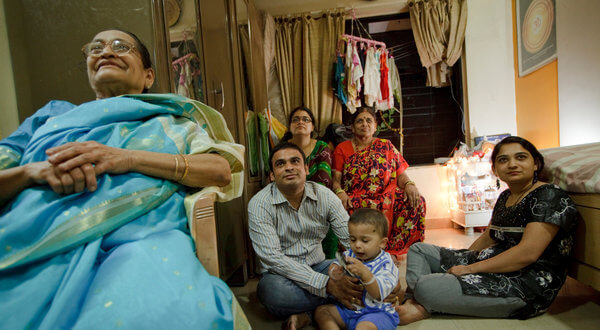 Studies in India and Brazil found a strong correlation between the introductions of cable TV and the popularity of soap operas with lower birth rates.

One of the most under-reported news stories of the last decade is the massive and unprecedented global drop in human fertility. Remember when scientists warned about the impending dangers of the world’s soaring population growth. Not anymore. Even families in historically fertile regions like Latin America and India are having fewer children.

India has a fertility rate that is only slightly higher than that of the United States. In India’s southern states, population size is actually dropping. Latin America, which has a total fertility rate of 2.2, is the developing area with the lowest proportional growth expected by 2050. This is mainly because of lower birthrates in Mexico and Brazil: the largest countries in the region.

Why Are Fertility Rates Also Dropping In Developing Countries?

Previoulsy fertile countries, such as India, Brazil, and Mexico are also experimenting a decline in fertility rates. Independent studies by Robert Jensen and Emily Oster in India and Eliana La Ferrara in Brazil suggest the introduction of cable TV and the popularity of soap operas are to blame (or to thank) for couples having fewer kids. Whether having cable and watching soap operas are to blame or are just a side effect of another factor, such as rising incomes or changes in cultural values, is still unclear.

In any case, these trends are not final. Some regions where fertility rates were dropping, such as Egypt, are now experiencing rising birthrates because the new government has discontinued key family-planning services.

Deciding whether to have a child is one of the most important (and expensive) decisions we ever make. The reasons why we do it vary widely from person to person and often involve several competing driving forces. We may be hardwired to feel the need to procreate, but culture, social expectations, and religion also play a major role. However, the decline (or lack thereof) of birth rates in France, Norway, India, Brazil and Egypt, show that the media, economic conditions, and government programs are also important factors that can accelerate or reverse the global trend toward lower fertility rates.