On August 28, 1963, on the 100-year anniversary of the Emancipation Proclamation, Martin Luther King Jr. led more than 200,000 demonstrators in the March on Washington for Jobs and Freedom. It was then that he delivered his now famous “I have a Dream” speech.

The very next year, Congress passed the Civil Rights Act of 1964, which was seen as a concrete step toward fulfilling the promises made in the Emancipation Proclamation and implied in the Declaration of Human Rights.

Fifty years later, what has changed? There might be a black President in the White House, but when it comes to the racial wealth gap, not much has changed. Actually, it has gotten worse.

Related article: How much money does it take to be considered “rich” in the US?


Here are some facts about the racial wealth gap that you will – or at least should – find shocking.

1. The Racial Unemployment Rate Gap Is Wider Than 60 Years Ago 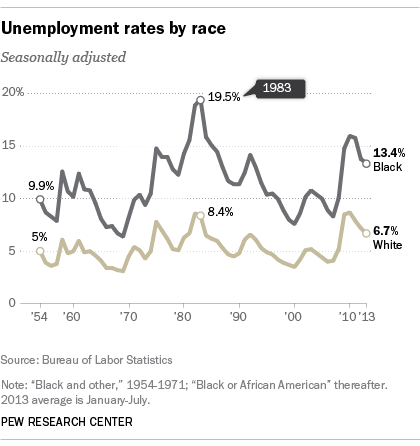 2. Racial Income Inequality is 29% higher than 40 years ago 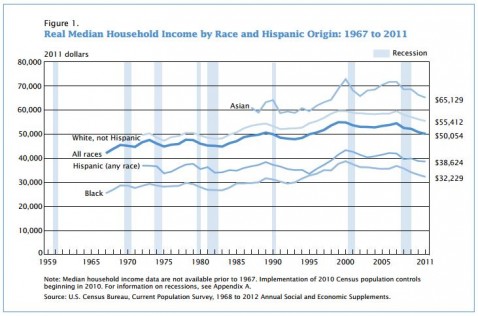 3. The Racial Wealth Gap Is Even Wider than the Income Gap

Income alone does not describe the real financial health of a household. You can have a six-figure salary and a million-dollar home, but if your debts outweigh your assets, you are still technically broke. According to a study by the Urban Institute, the racial wealth gap in 2010 was three times greater than the racial income gap. This means that even when black households have the same income, it doesn’t translate into the same wealth-building.

The inequality among blacks and whites is even more shocking when you look at the median household wealth. In this context, wealth is defined as total assets minus total liabilities. According to a 2011 report by the Pew Research Center, in 1984 the wealth gap between white and black households was 12-to-1. In 2009, the ratio had increased to an alarming 19-to-1 ratio.

5. The Racial Gap Increases with Age 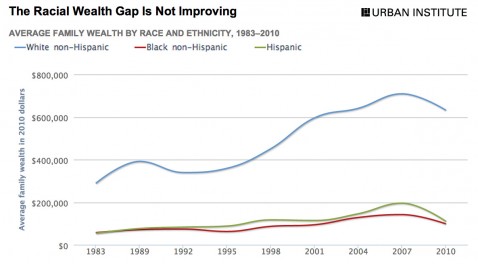 In the summer of 2009, right in the middle of the Great Recession, white workers were losing their jobs so quickly that the unemployment gap between whites and blacks was “just” 1.67 times higher for whites.

Even then, white households were able to fall back on their larger wealth reserves and weather the storm much better than black and Latino households. Latino Americans were hit the hardest due to their relatively high rates of home ownership. They lost 45% of their wealth and 50% of their home equity, according to statistics by the Federal Reserve’s Survey of Consumer Finances. 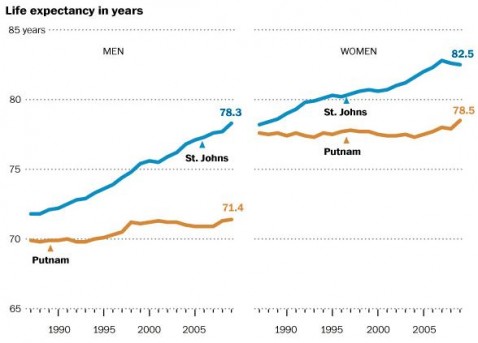 Politicians often quote the increase in life expectancy as a reason for raising the eligibility age for Social Security and Medicare. The problem with this argument is that only the wealthy have benefited from the increase in longevity. This is probably the darkest and saddest consequence of the racial wealth gap. A 2007 study by the Social Security Administration found that the longevity of male workers in the top half of the income distribution enjoyed a 6 years increase.  Meanwhile, the bottom half only benefited from a 1.3 years increase, over the last 30 years.

If you raise the eligibility age for Social Security and Medicare, the bottom 50% earners – which are disproportionately represented by racial minorities –will enjoy these benefits for even less time than their wealthier counterparts. In a way, they would be subsidizing the retirement benefits of the top 50% earners who are enjoying longer lives. This would also contribute toward the perpetuation of racial inequality for further generations.

8. School Segregation Is Back with a Vengeance

72% of Black and 77% of Hispanic students go to schools where the majority of students are minorities. Racial segregation is both a byproduct and a cause of racial wealth inequality. According to a report published by the W.K. Kellogg Foundation, half of all black and Latino students go to schools where 75% of all students are poor. In contrast, although there are more poor white students than poor students of color in the United States, only 5% of whites attend such schools.

When schools were desegregated in the late 1950s, it significantly increased the educational attainment, health status and income of blacks, as well as reduce the probability of them being incarcerated. On the other hand, segregation perpetuates cycles of poverty and impedes social mobility by restricting access to high quality elementary and high school education.

“…disparities in health cost the U.S. an estimated $60 billion in excess medical
costs and $22 billion in lost productivity in 2009.” – Altarum Institute

According to a 2013 study by the Altarum Institute, if the wages of minorities were increased to the average income of whites, the total U.S. earnings would increase by 12%, which would represent nearly 1$ trillion. This would boost the entire economy as it would increase corporate profits by $180 billion, and federal tax revenues by $290 billion.

The benefits to the economy are even more spectacular if you project the results of closing the income gap to 2030. Minorities currently make up 37% of the working age population in the United States, but by 2030, minorities are projected to represent 46% of the population. If the estimate proves accurate, closing the income gap would increase the Unites States’ GDP by 20% and federal tax revenues by $1 trillion. (Source)

The economists at the University of Chicago and Stanford University published a 2013 study showing that a reduction in occupational barriers among blacks and women between 1960 and 2008 could account for 15% to 20% of the aggregate growth in productivity per worker over that period.

This means that reducing the racial economic gap is not only the right thing to do, it’s good for business, and would make America a more competitive player in the global market.

Want to learn more? Read Beyond Broke, a Slideshare stressing the importance of closing the racial wealth gap for economic security.