According to this belief, prices dropped after the peak, which caused adjustable-rate mortgage rates to rise and lead to an increase in foreclosures and defaults.

However, a recent study investigated the data and is presenting an alternative narrative.

Who really was the cause of the housing market crash?

A group of researchers has come to an interesting new conclusion after reviewing the Federal Reserve Bank of New York’s Consumer Credit Panel/Equifax Data (CCP) on household debt and defaults from 1999 to 2013.

In their paper, ‘Credit Growth and the Financial Crisis: A New Narrative,’ they look at the growth in mortgage debt and defaults across the different credit score ranges (quartiles one through four). Surprisingly, they found that subprime borrowers (quartile one) were not the primary problem.

In fact, subprime borrowers showed modest growth in debt balances and originations during the boom. Then, during the crisis, their mortgage delinquencies decreased from 40% to 30%. 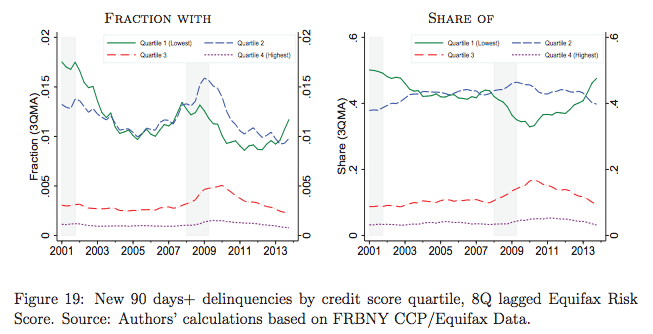 When looking at the share of foreclosures by quartile:

This is shown in the graph below on the right. 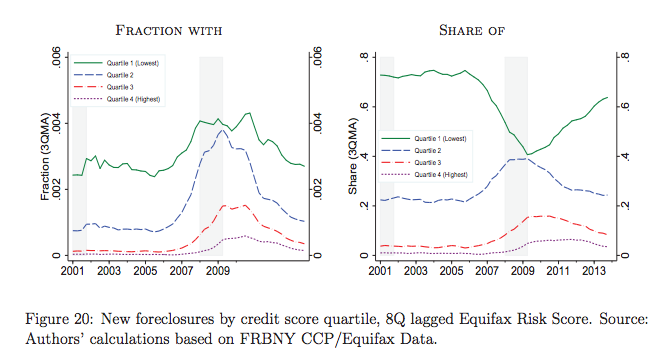 In summary, the increase in mortgage delinquencies and foreclosures was concentrated in the middle and upper credit score ranges (largely quartile two and three) during the crisis.

This is unusual because people with prime credit typically have low mortgage delinquency and foreclosure rates. The researchers dug further and began to find some answers when looking into real estate investors (people who hold two or more first mortgages).

Then, between 2004 and 2007, quartile one remained mostly stable, while quartiles two and three increased by 15%, and quartile four grew steadily and peaked at 43% at the start of the recession.

Meanwhile, trends in the share of mortgage balances held by individual owners were trending downward in an opposite pattern.

From 2007 to 2009, delinquencies and foreclosures increased as follows: 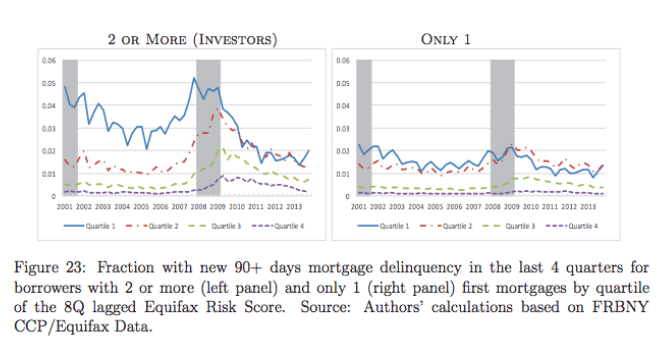 Note that, at the onset of the crisis, there was a sharp rise in the investor’s share of delinquencies and foreclosures for borrowers in quartiles two to four.

So, while many point the finger at subprime borrowers, the data shows that prime borrowers investing in real estate were responsible for a disproportionate amount of the added mortgage balances, delinquency rates, and foreclosures.

It begs the question of what was going on behind the scenes? Why did so many people investing in real estate all of a sudden?

What was going on with real estate investing?

For insight, we interviewed some industry experts.

Adham Sbeih, CEO of Socotra Capital, says “To me, the heart of the issue was the mantra that was internalized by homeowners and real estates investors alike: ‘You cannot lose if you buy real estate.’ The subprime mortgages were one part of the bubble. However, speculation was rampant at every level, from subprime up to prime. Everyday homeowners viewed their homes as an investment where they could make money, which is false.”

He adds, “In the years before the bubble burst, there was a lot of home appreciation, and homeowners were abusing cash-out refinances to buy second homes as well as luxury items like boats and new televisions.”

Retired mortgage broker Mike Arman breaks down the bigger picture. He says, “There was no individual ‘who’ to blame. As the Old Chinese proverb says, ‘No one raindrop thinks it is responsible for the deluge.'”

He then shares the following players as contributing to the crash:

Arman adds, “All the stars were in perfect alignment for this to explode spectacularly, and son of a gun, sure enough, it did. Lots of people got really badly hurt, and we are still seeing the after effects.”

There are many pieces to this puzzle, but this study revealed a particularly important part previously missing from the story: subprime borrowers were not the main problem.

This is a significant finding because it can help us create regulations to prevent history from repeating itself.

Jessica Walrack is a personal finance writer at SuperMoney, The Simple Dollar, Interest.com, Commonbond, Bankrate, NextAdvisor, Guardian, Personalloans.org and many others. She specializes in taking personal finance topics like loans, credit cards, and budgeting, and making them accessible and fun.