In a world full of scammers and hackers, it is hard to believe that there may be money somewhere out there just waiting for you to claim it. Most of us would think this is just another prank. But in reality, the possibility that you may have unclaimed property is quite real. 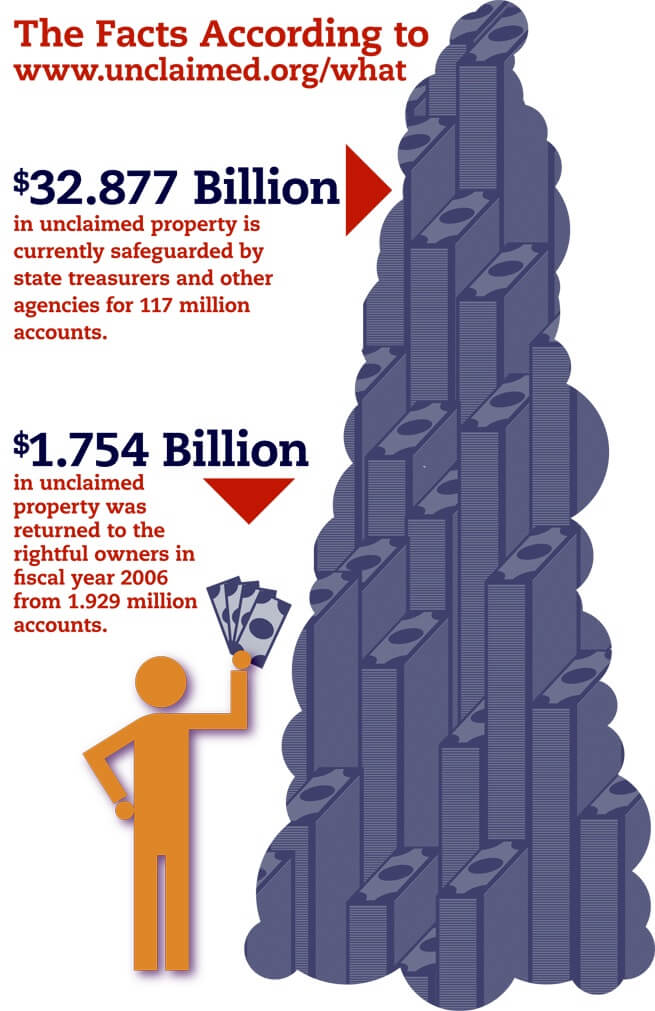 ABC News reported that, “The 50 states and the District of Columbia are currently holding at least $32 billion in unclaimed funds, just waiting to be reunited with the rightful owners.”

These Unclaimed funds come from a variety of different places, like forgotten bank accounts, uncashed paychecks, money orders, insurance payouts, stocks and dividends, retirement accounts, old safe deposit boxes, unused gift cards, rent or utility deposits – the list goes on and on. And it doesn’t take very long for money to be considered ‘lost’. For example, in New Jersey checks that aren’t cashed after three years from when they are issued, are presumed abandoned and the money is sent to the state to hold.

There was a series presented by ABC in 2011-2012 on the Good Morning America called “Show Me the Money”. In one segment, GMAs Elisabeth Leamy went to the Mall of America in Minnesota and teamed up with the Minnesota Department of Commerce to try to help shoppers search for unclaimed money that might exist in their names. Those walking by were extremely skeptical until someone finally tried it and found out they actually DID have unclaimed money in their name. From that point on, GMA was swamped with people wanting to search if they had unclaimed money out there too. Several people did, with the highest amount found that day being $65,466.85, and the total re-claimed money for the day was over $87,500.

Other than our cultural shock of being swindled in recent years, there are many other reasons why some people typically believe that none of this unclaimed property could possibly be theirs. Many of these beliefs are simply not true though, so we have decided to set the record straight on a few of them.

Myth #1: There will never be any unclaimed money for me. In fact, approximately 1 out of every 10 Americans has unclaimed money waiting out there for them. If there isn’t any now, you should get in the habit of checking back every couple of years or so. You never know when you may lose track of some accounts or property as you go about your financial life.

Myth #2: You have to be rich to be owed unclaimed money. In fact, rich people usually have professional accountants and lawyers who keep track of their money. The rest of us have to muddle through on our own. If you have ever banked anywhere, rented anything or bought something, there could be unclaimed money in your name. If you’ve ever put down a utility deposit or given a gift card that the recipient didn’t use, those are just a few more chances for unclaimed money.

Myth #3: You have to have Social Security numbers and account numbers in order to search. In fact, that’s not true. The main free websites where you will begin your search ask you to search using your name and then verify using your address or past address. It’s a cinch. It’s so basic you can look for friends, relatives and even loved ones who have passed away and might have left something the family can claim. Some great sites to try out are www.unclaimed.org and www.missingmoney.com, which allows you to search several states at once.

Myth #4: You will have to give a percentage of your unclaimed money to whoever found it for you. There are hundreds of people called “finders” who have made a business of searching for unclaimed funds for other people and then contacting them to say they’ve found money and will only reveal where and how much if the recipient agrees to give them a cut. Don’t fall for it. Occasionally finders can be helpful in truly tricky cases, but you shouldn’t pay for information you can look up for free in 10 minutes, using the websites mentioned earlier.

Myth #5: Claiming your money is difficult and confusing. False again. If you find unclaimed money online, most states let you click a link and claim the money right there and then. You will receive a check within weeks. If the state makes you jump through more hoops than that, like sending in notarized paperwork via snail mail, consider yourself lucky. That often means you are owed a LOT of unclaimed money and they are taking more precautions to make sure it is really yours before releasing it. Even unclaimed savings bonds are easy to get. You can search www.treasuryhunt.gov using your social security number, and if you get a hit a federal worker actually CALLS you to walk you through the paperwork. Doesn’t get much easier than that!

Here are a few other interesting facts about unclaimed funds, provided by the National Association of Unclaimed Property Administrators (NAUPA).

$4.686 billion received in FY 2006 from business accounts where contact has been lost with the owners.

A total of $32.877 billion is currently being safeguarded by state treasurers.

Claims can be made into perpetuity in most cases – even by heirs.

Every state has a different amount of Unclaimed Property so you’d have to go to each state independently to see how much they are holding. However, NAUPA recently reported the following newsworthy information:

So what are you waiting for??? Start searching today!

Need a better way to manage your money? Check out our money management reviews today!