Payday lending is bad, right? That certainly seems to be the accepted truth and the force behind a significant portion of America’s consumer financial regulatory policy in the last few years.

Critics, which include the Consumer Financial Protection Bureau (CFPB), refer to payday loans as predatory and abusive “debt traps” (source).

But is such criticism fair or over-simplistic? What is a payday loan exactly, and is it ever a good idea to get one? How do these high-interest loans compare to other forms of credit provided by traditional lenders?

Where payday loans fit in the lending industry

Prime and subprime are the terms lenders use to rate the creditworthiness of borrowers. A simple way to look at it is that prime borrowers qualify for the best terms and lowest rates, while subprime borrowers don’t. Every lender has a different definition for “subprime,” and in the last few years, branding-conscious market entrants invented new terms, such as “non-prime,” “near-prime” and even “middle income,” which only makes things more confusing. A good rule of thumb is that anyone with a credit score below 700 is not a prime borrower. That includes 44.3% of consumers, according to a 2016 study by FICO (source).

In the last five years, a new breed of online lenders have emerged with installment loan products capped at 36% annual percentage rate that target borrowers who have FICO scores in the 620-700 range. After the 2007-08 financial crisis, these lenders helped fill a gap in the market when the banks stopped lending to this demographic. That said, most of these companies have loan application-to-funding rates in the single digits. When you factor in the ~25% of consumers that don’t even meet their FICO cut off, it’s clear to see a substantial portion of the overall market is still left without many options when a financial emergency emerges.

Payday lenders try to address this market with a short-term (usually two weeks) fee-based loan. In a traditional payday loan, a customer writes a personal check made out to the lender. The lender agrees to hold the check for a specified period of time, usually until the customer’s next payday or for up to about two weeks, before depositing it. In exchange, the lender advances a cash payment to the customer that is the amount of the check minus a fee. For example, a borrower might write a check for $115 that the lender agrees to hold for two weeks. The lender provides the borrower with a $100 cash advance. So the borrower pays a $15 fee for a two-week finance charge.

When you do the math, it’s clear payday loans are an expensive source of credit. The average fee for a payday loan, for instance, is $15 for every $100 borrowed (source). That equates to 391% APR on a $100 loan with a two-week term.

There is a common misconception that payday lenders opportunistically target this segment of the market because credit scores are somehow correlated to IQ levels, or at least some sort of lack of common sense. Hence these borrowers can be easily exploited because they simply don’t know any better. This is elitist thinking that is wrong on many levels.

The truth is more pragmatic. Borrowers with a FICO under 600 default at an extremely high rate.  As a result, payday lending is one of the only business models that has managed to turn any profit when lending to this high-risk segment.

A study by the Consumer Financial Protection Bureau in 2012 found the default risk of borrowers with credit scores under 550 ranged from 45% to 70% (source). 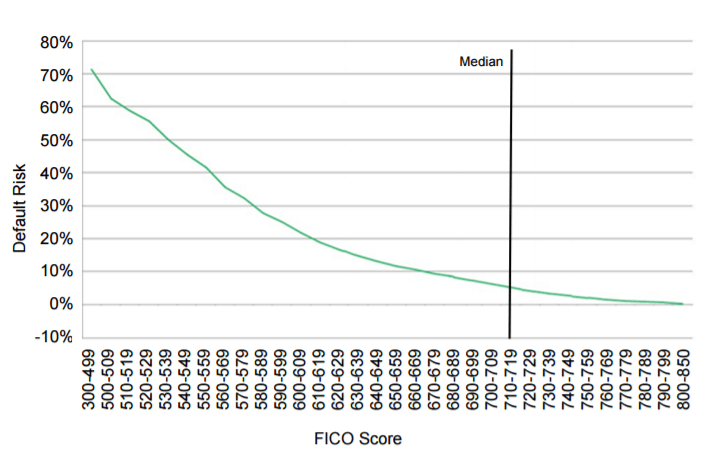 Default costs are high but the marketing and operations costs associated with these loans are considerable as well. Lenders operating with brick and mortar stores tend to have high operational costs and those operating online tend to have high customer acquisition costs. In either case, costs associated with collections are higher than normal due to relative default rates.

In the abstract of their research paper, Flannery and Somolyk said: “We find that fixed operating costs and loan loss rates do justify a large part of the high APRs charged on payday advance loans.”

In case it’s not yet clear, lending small amounts of money to high-risk borrowers for short periods of time is expensive, and that’s why it costs more.

How do banks compare?

Payday lending is no more evil than any other interest expense. Yes, the cost of credit is higher than one would get from a prime lender, but the lender costs are higher as well.

Prime lenders, such as banks and credit unions, rarely consider borrowers with poor credit. For the millions of Americans living paycheck to paycheck, the lack of any financial buffer can result in an overdrawn bank account. While payday loans are an expensive source of credit, the cost pales in comparison to the overdraft fees that banks charge, which are often in the 3000+% APR range.

The nation’s 628 biggest banks made $11.16 billion just from overdraft and non-sufficient funds fees in 2015, the first year they’ve had to share this data publicly.

On average, these two fees amounted to 8% of banks’ net income and made up almost two-thirds of all service fees charged to consumer bank accounts, according to a report by the Consumer Financial Protection Bureau.

Regardless of the form of credit, interest paid is wasted money unless it increases your overall assets. For example, one could argue that a department store credit card is a far more predatory form of credit because it does nothing to increase borrower net wealth and only enables consumerism.

For someone facing a difficult situation such as “Do I fix my car so I can keep my job?” a payday loan can be a lifeline.

“The real question is if you don’t have any other options or choices, is it better to take out that loan even at the high cost that it is or not take it out at all?”  says Lisa Servon, professor of city planning at the University of Pennsylvania and author of “The Unbanking Of America.” “And so many of the people that I talked to and interviewed said I’m glad that that money was there for me.” (source)

However, it’s crucial that someone who takes on a short-term loan approaches it and treats it as such. Whether it’s letting a payday loan rollover or a high-rate installment loan carry on for too long, you end up paying a great deal of money.

A general rule of thumb is that you should only take out a loan and pay interest if it will increase your overall wealth. Because of real estate appreciation, mortgages, home equity loans and lines of credit and personal loans for home improvement can be considered “good” debt. However, if someone has a financial emergency and can only qualify for a payday loan that enables him or her to keep his or her job, should this not also be considered a reasonable financial decision?

The major issue with payday loans is they are primarily not being used in situations in which they maintain or improve financial well-being. A report by Pew Charitable Trusts found that 69% of them are used to cover recurring expenses and are indebted with payday lenders, on average, for five months of every year. (source). This adds up to a significant amount of money that could have been saved.

A subprime borrower considering a payday loan should think long and hard about whether they can find a way to move forward without it. For most, the broader issue is that the income coming in is less than the expenses going out. It may mean taking on additional side work or cutting out more restaurant meals.

Additionally, interest expenses can vary significantly so it’s important that any borrower looking for any type of loan do their research. SuperMoney has done all the work for you so that you can research your options and even get prequalified offers from multiple lenders to compare the APR, term and total cost of your loan in one place.

All borrowers should do what they can to improve their credit scores in case they need to borrow money. There are plenty of strategies anyone with a subprime credit score can take to increase their score.

For example, you can set up one or more secured credit cards and use them responsibly to establish credit. On a similar theme, a company named Self Lender lends its customers a small low interest loan that is held in and secured by an interest yielding CD account. This allows them to lend to borrowers that would otherwise never qualify, while allowing the borrower to avoid secured credit card deposit requirements. The borrower makes monthly payments for the loan and payment history is reported to the credit bureaus to help establish credit. At the end of the term, Self Lender releases the original loan plus interest to the borrower.

With the right strategies, it is possible to increase your credit score into prime territory.

Related reading: People who turn to payday loans often do so because they believe they can’t qualify for any other type of loan. Or else this option is just what first comes to mind when they realize they need a quick loan for, say, $500. Before you settle for a payday loan to cover your $500 emergency, read How Can I Get a $500 Loan With No Credit Check? to learn all your options.