Miriam Weeks (aka Belle Knox) understands the economic realities of college costs far more than the average 19-year-old, as displayed in essays she’s written for Time magazine, OXJane and, most recently, in the new documentary film “Becoming Belle Knox” (produced by Conde Nast, the esteemed publisher of The New Yorker, Vanity Fair, Wired and many other iconic magazines).

A Clarion Call to Us as a Society

Given all the salacious coverage of Ms. Weeks’ story, you’d be forgiven if you ignored the click-bait links thinking that they probably lead to NSFW websites. But behind all the “Duke University Student-cum-PornStar” headlines lies a story that should be a clarion call to us as a society.

And the main takeaway isn’t Chris Rock’s famous routine about fathers’ “only job in life,” which albeit funny and poignant, does not present a solution to the crisis that has been created by the skyrocketing costs of college tuition. Mr. Rock unintentionally makes this apparent in his unfortunately sexist “Stripper Myths” bit contained within the same performance.

Indeed the primary message Ms. Weeks is delivering is that college costs are exploiting the working-class, and the effects are as emotionally heartbreaking as they are financially catastrophic.  And for us to collectively stand by as this epidemic engulfs us is utterly asinine.

If you’re not acquainted with the story of Miriam Weeks, she is a bright, young teenager whose academic achievements earned her entry into one of America’s most prestigious institutions of higher learning – Duke University.  But like many families, neither she nor her parents possessed the wealth required to cover her tuition. (Annual tuition at Duke is currently $60,000.)

It used to be that you could “work your way” through college with a blend of part-time and seasonal jobs combined with, perhaps, a modest amount of loans.  But good luck working at Starbucks, Wal-Mart or any other position a typical college kid can land and covering even the current average tuition cost of $24,000 for a four-year college, much less the cost of a top-tier school.

To bridge the financial chasm, working-class kids are told that they must take on ridiculous amounts of debt if they want to attend the schools to which they’ve earned entry.

Ms. Weeks decided that taking on mortgage-sized amounts of debt was unacceptable. Instead, she chose to become entrepreneurial and began working in one of the few fields that offered her a shot at earning the quarter-of-a-million dollars that her Duke degree is expected to cost. She became an adult film star.

She assumed the stage name Belle Knox in an attempt to stay anonymous on campus, but was soon unwillingly “outed” by a male classmate. To her credit, Ms. Weeks has decided to take her unwelcomed and very public outing (which quickly went viral) and turn it into something positive by calling attention to the societal cancer that is U.S. college costs.

Unfortunately — but unsurprisingly — many commentators have chosen to make hay about the morality of Ms. Weeks’ career choice instead of addressing the financial injustice lying at the heart of the issue.

Barbara Walters provided a good example of this faux-shock and finger-wagging when she interviewed Ms. Weeks’ on The View. (Perhaps Ms. Walters would be less shocked if she took a second to remember that her own life-story includes ‘controversial’ liaisons.)

Over at CNN, Piers Morgan displayed his incredible ability to be a tool by telling Ms. Weeks that he found her choice of work to be a questionable way to spend her “spare time.”

Unpacking all the sexism contained in Mr. Morgan’s interview will have to wait for another article – but will someone please explain to this dolt that ‘spare time’ is what Ms. Weeks’ wealthy classmates have when they travel to Europe over summer break or slip away for a weekend of skiing in Aspen.

Alas, far more shocking is the fact that we have made such extreme levels of debt our society’s “gift” to academically accomplished children of modest means – students who have worked long and hard to achieve something that we tell them is mandatory if they dare dream of ever having a “good life.”

And it’s important to remember we’re talking about children here. Colleges and universities essentially purchase the financial futures of kids who are still underage minors attending high school.  Sixteen and seventeen-year-old children who we don’t even allow to legally buy beer, cigarettes, or to vote, are targeted with sophisticated marketing and enormous social pressure to take on loans that dwarf the combined resources of their families. Moreover, the amount of debt is often tragically disproportionate to the incomes these children will earn post-graduation.

A good indication of the degree to which students are being misled is evident in a recent study which revealed that students believed that, on average, it would take about a decade to pay off their student loans.

You’re not even close kids. A study of the actual average revealed it to take 21 years.  Meaning, many students will be in their 40s when they’re finally completing their loan repayment — just in time for them to take out new loans to help their children pay for college. (Just a quick note on that front: reports are projecting that, by 2030, public institutions will cost around $44,000-a-year, with private tuitions running as high as $130,000 annually.)

In an attempt to shift the blame for this systematic exploitation away from colleges and student loan industry vampires, so-called “experts” give numbskull advice suggesting that this can all be solved if students and their parents would just “consider that the total amount they borrow should not be any more than the student’s estimated starting salary upon graduation.”

Are you kidding me?  I’d love to see a study on the accuracy of high school juniors and seniors (as well as their parents) in predicting their post-graduation salary.  Why not ask them to predict the number of years their first marriage will last or how long they’ll live?

And I can only imagine a parent invoking such ‘advice’ to their child upon their acceptance to college: “Susie dear, I love you… but I don’t think you should go to that college because I don’t believe your potential in life warrants a top-tier education.”

Oh, the places you’ll not go!

This unjust financial heist of the working-class has been building up for awhile. No one less than Nerd Jesus himself, Steve Jobs, made this cost-benefit analysis when explaining why he quit college: “Why did I drop out? All of my working-class parents’ savings were being spent on my college tuition. After six months, I couldn’t see the value in it. ….And here I was spending all of the money my parents had saved their entire life.”

And he was describing tuition levels in 1972! Since then the cost of college has risen over 500%, far outstripping the inflation rates on cost of housing, energy, even health care.

(Story continues below the three graphs.) 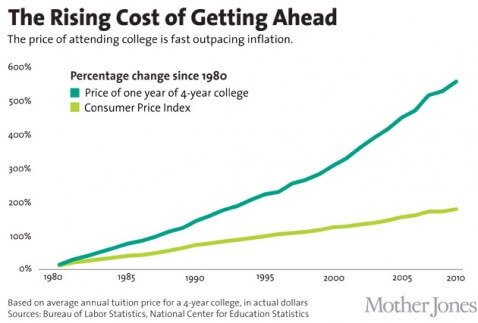 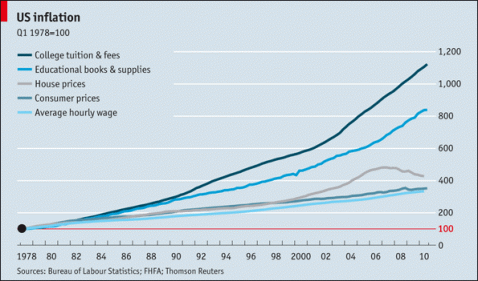 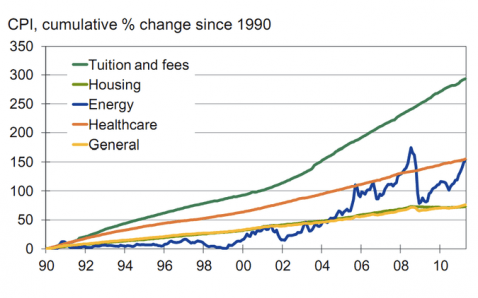 Mr. Thiel summed-up his recent awaking on this issue by saying, “I did not realize how…screwed up the education system is. We now have $1 trillion in student debt in the U.S… cynically, you can say it’s paid for $1 trillion of lies about how good education is.”

In response, Thiel has launched a foundation that offers $100,000-a-year fellowships to qualifying kids willing to skip-out on college and pursue entrepreneurship instead.

But real change is still far off and in the meantime another collegiate year has begun; bringing yet another generation of kids into the crushing college loan vortex.

In a sign that her message is beginning to be taken seriously, Ms. Weeks was recently invited to give a lecture at the University of North Carolina, where she showed her characteristically strong, unapologetic stance regarding her situation.  Unafraid of the elephant in the room, she cut to the chase by saying, “I found that getting screwed on camera was the best way to avoid getting screwed by the education system.”

Reports are already piling up which show that student debt is becoming a huge drag on the entire U.S. economy, with student loan burdens forestalling millions from buying homes, cars, and starting businesses, just to name a few of the consequences. Perhaps these broader impacts will help marshal the necessary political and social forces required to put a stop to this screwing of working-class children and their families. Once accomplished, colleges can teach courses about the ‘bad, old days’ of insane tuitions; and within those classes should be thank you notes to Miriam Weeks for her brave, outspoken and ahead-of-the-curve advocacy.

The opinions expressed in this article are the author’s own and do not necessarily reflect the opinion of SuperMoney.com.

Need cash in a hurry but don’t know which personal loan company you can trust? Or maybe you’re interested in consolidating your student loans at a lower interest rate. Supermoney is here to help you find the best options for all you loan needs.