So just how far do one hundred dollars go these days? Well, the answer may just depend on where you live. The Tax Foundation has analyzed the real value of 100 dollars in each state. Because 100 dollars will buy less in a state such as New York, and more in a state like Kansas, the research done by the Tax Foundation adjusts the value of 100 dollars to reflect the actual buying power in each state. So exactly what does this spending power mean? It means that the consumer in Kansas can get more goods for the same one hundred dollars than a person shopping in New York. 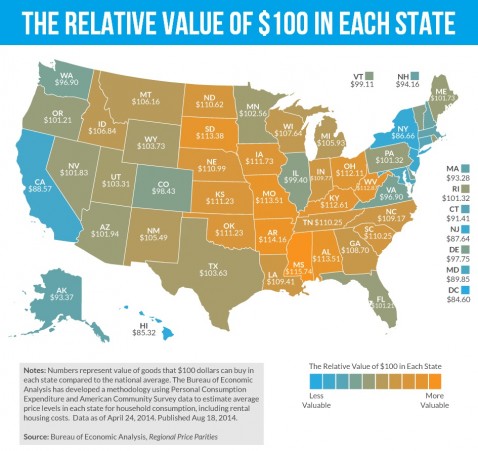 To better understand the cost of living for a certain area, we must look at the Regional Price Parities (RPPs), which measure the differences in the price levels of goods and services across states and metropolitan areas for a given year. RPPs are expressed as a percentage of the overall national price level for each year, which is equal to 100.0.  The price level is determined by the average prices paid by consumers for the mix of goods and services consumed in each region. For instance, someone living in Kansas would pay $89.90 for something that, on average, costs 100 dollars; in New York, a consumer would pay $115.40 for that same 100-dollar item.

By looking at the cost of living for a certain city or region, you can determine the value of your money and more accurately compare just how far your salary will go in a certain area.

It is probably not a shock to you that New York and California came in near the top of the list for some of the priciest states to live in, but it may surprise you that Washington D.C. actually occupies the first spot, with consumers paying 15.4 percent more for goods, and Hawaii came in second, paying 14.68 percent more on average. People living and working in these areas need to make around 15 percent larger salaries to compensate for the difference in the cost of living in order to be able to afford the same goods and services that are obtained by others across the country at lower prices.

At the other end of the spectrum, Mississippi is the least pricey state; here consumers pay around 15.74 percent less for comparable goods than in other parts of the country. Arkansas is the second least expensive state to live in or visit, paying 14.16 percent less for similar items. For those living in the areas where goods are less expensive, their money will have more buying power. In essence, it is like getting a 15 percent pay raise.

Illinois is the state where the value of 100 dollars is closest to the actual value. Residents pay only an average of $0.60 more per 100 dollars. So if something is actually valued at 100 dollars, an Illinois consumer would expect to pay $100.60 for it. Other states that come in close to the actual 100 dollar value are Florida, Oregon, and Rhode Island.

As expected, the East Coast and the West Coast represent areas where the cost of living is higher. In general, the states where the cost of living is lowest were more in the heartland of the country. The only thing that can be deduced from the states in which consumers neither pay more or less than true value is that there is no clear pattern geographically, as they are spread out all over the U.S. Of course, within each state there are also differences in cost of living from region to region and city to city.

Why Is This Information Important?

The Bureau of Economic Analysis compiled this information for the first time earlier this year. In its press release for the report, U.S. Secretary of Commerce Penny Pritzker was quoted as saying,”For the first time, Americans looking to move or take a job anywhere in the country can compare inflation-adjusted incomes across states and metropolitan areas to better understand how their personal income may be affected by a job change or move. Businesses considering relocating or establishing new plants also now have a comprehensive and consistent measure of differences in the cost of living and the purchasing power of consumers nationwide. The Commerce Department’s ‘Open for Business Agenda’ prioritizes making our data more accessible and understandable so that it can continue powering both small and large businesses nationwide.”

Of course, the cost of living is not the only factor that affects how expensive a state might be to live in. While the cost of living for an area does affect a consumer’s spending power, other elements, such as income and tax rates also influence this ability.

This type of income is a dollar amount that is stated in the currency in which it is earned, and unadjusted for inflation or deflation. It is the part of the salary paid out in cash, not including any benefits. The easiest way to think of nominal income is when someone asks what your salary is, and you say 50,000 dollars, you don’t take into consideration which state you live in and what the cost of living is. It is strictly the dollar amount that you make.

This is your actual purchasing power, which is adjusted for inflation. Real income shows you exactly how much your money can buy. For example, if you received a 3 percent raise in salary this year, and the cost of living also increased by 2 percent, then you actually only received a 1 percent raise—your actual spending power only increased by 1 percent because of factoring in the inflation, or cost of living increase. From the scenario above, it is easy to see that the 50,000 salary is not the same in Washington D.C. as it is in Mississippi. Someone living in D.C. would need to make 57,700 dollars, while someone living in Mississippi would only need to make 42,150 dollars to realize the actual spending power of a salary with the nominal value of 50,000 dollars.

Another factor that will determine exactly how far your money will go is your state’s tax rate. Some states have no income tax, while other states’ rates vary depending on which tax bracket you are in, with California topping the list with a 13.3 percent income tax. Obviously, a lower tax rate means more money in your pocket, and more money in your pocket equals more spending power.