The debt settlement industry has grown rapidly since 2005, when it first became a widely available option for consumers. Although still a controversial financial service, it is now a significant part of the debt relief sector. This study compiles available data sources in search of a better understanding of how the industry works.

This report is based on data published by the Federal Reserve Bank, the Consumer Financial Protection Bureau, the Center of Responsible Lending, and reports prepared for the American Fair Credit Council by Hemming Morse LLP and John Dunham & Associates.

What is a debt settlement?

A debt settlement is an agreement to reduce the balance a creditor will accept as payment in full. Instead of declaring bankruptcy, consumers negotiate terms that will allow them to resolve debts they can’t afford to pay in full. Consumers can negotiate directly with lenders or hire debt resolution professionals.

The debt settlement industry is composed of private companies that help debtors negotiate with lenders to reduce the amount they owe in exchange for a lump-sum payment or a series of installment payments.

How does debt settlement work?

Debt settlement is based on the idea that if you don’t make payments, creditors may accept a lower amount to avoid the risk of a borrower declaring bankruptcy. The process of debt settlement usually requires consumers to make monthly payments to an escrow bank account until there is enough money for the debt settlement company to negotiate with creditors.

On average, consumers who complete a debt settlement program reduce their debt by 45% (source).

Although debt settlement is not for everyone, it does provide savings to most consumers. According to a statistical review prepared by Hemming Morse LLP on behalf of the American Fair Credit Council (AFCC), 95% of clients saved money after fees (source). 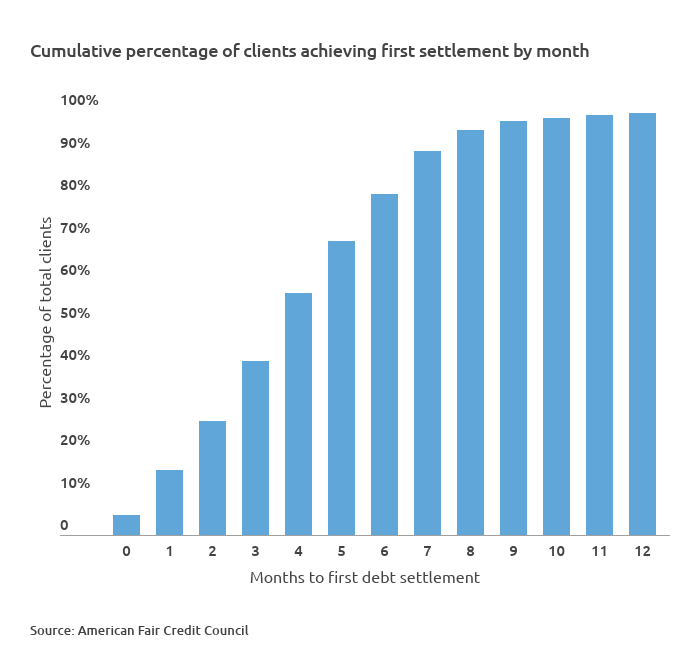 The review analyzed 400,000 clients and 2.9 million accounts enrolled in debt settlement programs from 2011 to 2017. As you can see in the chart above, only 5% of clients do not achieve a settlement within the first year. 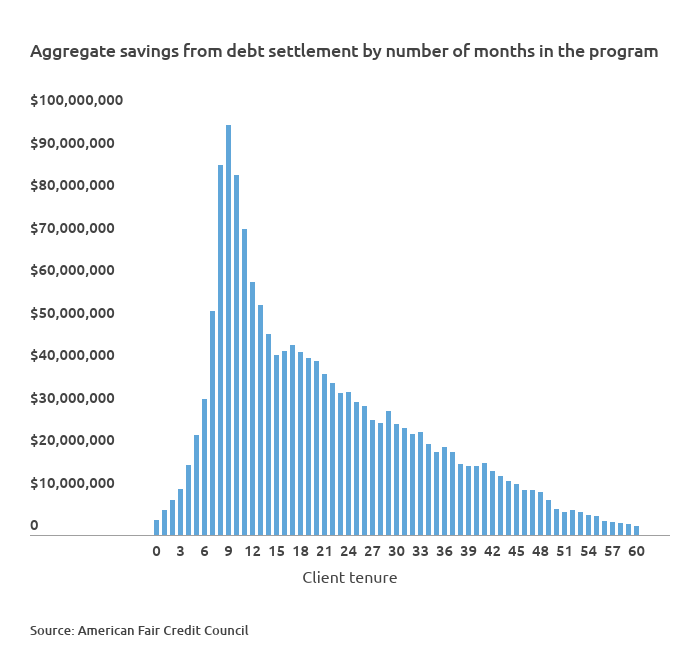 Debt settlement firms are not allowed to charge for their work until they settle an account. In the vast majority of settlements, the savings for consumers exceed the fees charged by firms.

According to the AFCC’s review, on average, for every $1 a debt settlement client pays in fees, they receive $2.64 in savings. As the chart below shows, the clients analyzed in the 2011 to 2017 report incurred $1.0 billion in fees and reduced their debt balance by $2.6 billion. 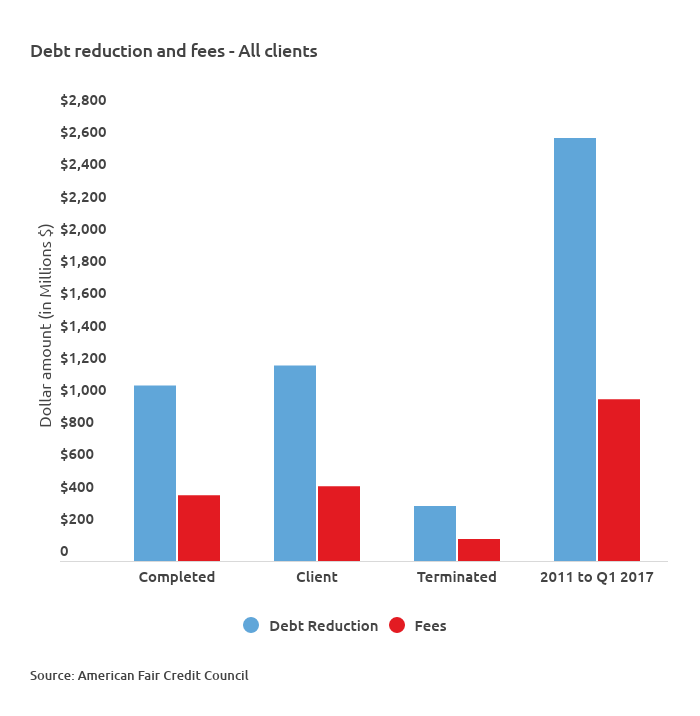 Of course, these savings may have been higher for consumers if borrowers had negotiated directly with creditors. But a similar argument could be used when hiring investment advisors, tax professionals, or mechanics. It is often cheaper to do the work yourself, and there is no guarantee the results will be better if you hire a professional. However, many people are happy to pay for the service, particularly when they don’t have the time or know-how to do so themselves.

However, debt settlements are designed as a last recourse for people who can’t afford to pay off their entire debt. Typically, good candidates for a debt settlement don’t have great credit. If you have good credit, you may want to consider a debt consolidation loan. Unfortunately, lenders rarely offer debt consolidation loans to consumers with a high debt-to-income ratio.

In some cases, the IRS will consider “forgiven debt” as taxable income. This could lower considerably the savings you receive from a debt settlement. The “good news” is that, normally, the IRS will exclude the income from forgiven debts if the taxpayer is insolvent (source). Taxpayers are insolvent when their total liabilities (debts) exceed their assets The IRS uses Form 982 to determine whether income from debt forgiveness is taxable.

What is the size of the debt settlement industry?

In 2018, there were a total of 902,449 accounts settled by debt settlement companies, according to a 2019 report by John Dunham & Associates. However, the aggregate number of open accounts was 2.9 million, spread over 400,000 consumers.

Debt settlement companies reduced the debt balance of clients from $5.1 billion to $2.5 billion. The average settlement amount was $2,727. These figures refer exclusively to accounts settled in 2018.

The latest aggregate data on the size of the debt settlement industry from the American Fair Credit Council puts the total debt enrolled with debt settlement companies at $12 billion (2017). Of course, this does not include debt settlements negotiated directly by consumers. A look at the total charge-offs by banks gives an estimate of the potential for growth of the industry.

If you include supplier and induced impacts of companies that do business with debt settlement companies, the industry generates an additional 28,000 jobs, $1.9 billion in wages, and $659.6 million in taxes.

Although the number of consumers enrolled in debt settlement programs has increased, the average amount per account has dropped from $4,802 to $4,132. 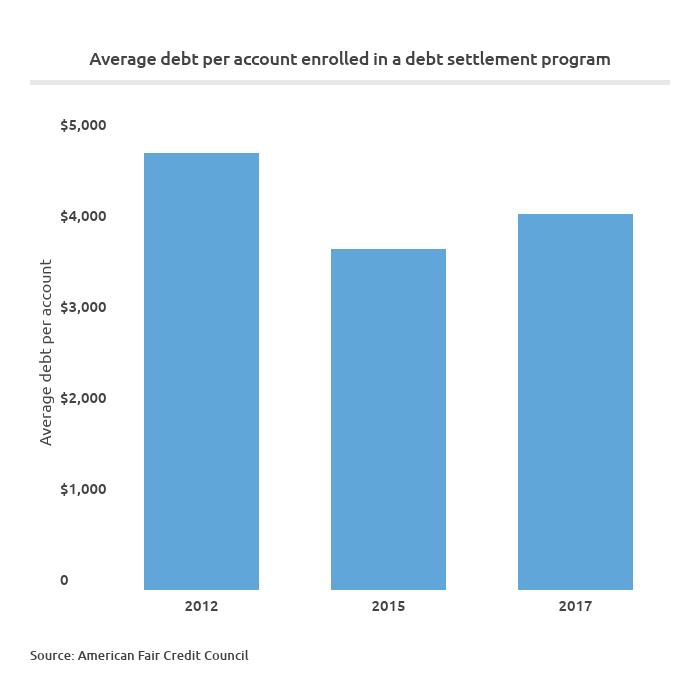 This trend mirrors the data we in our Consumer Credit Card Study, where we observed a growth in the percentage of households that carry credit card debt but a drop in the average balance of credit card accounts. 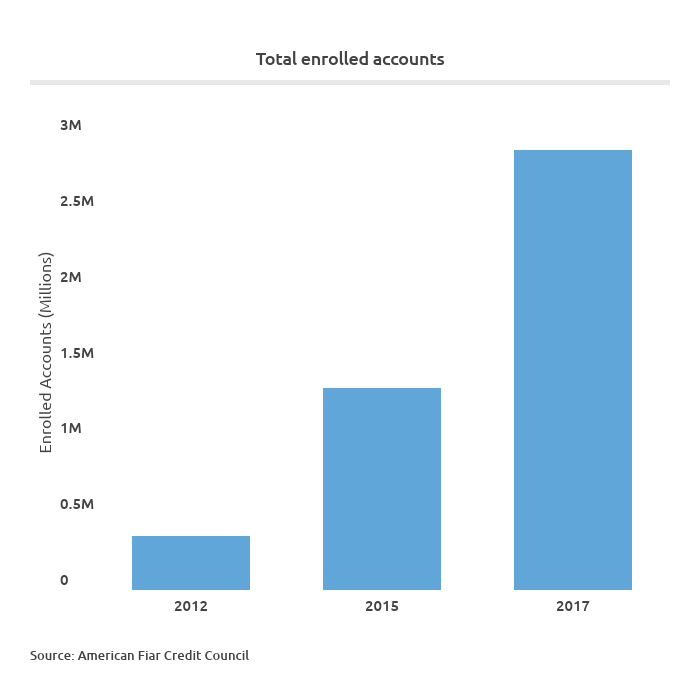 The average consumer enrolled in a debt settlement program has seven accounts with an average balance of $4,132 (source). 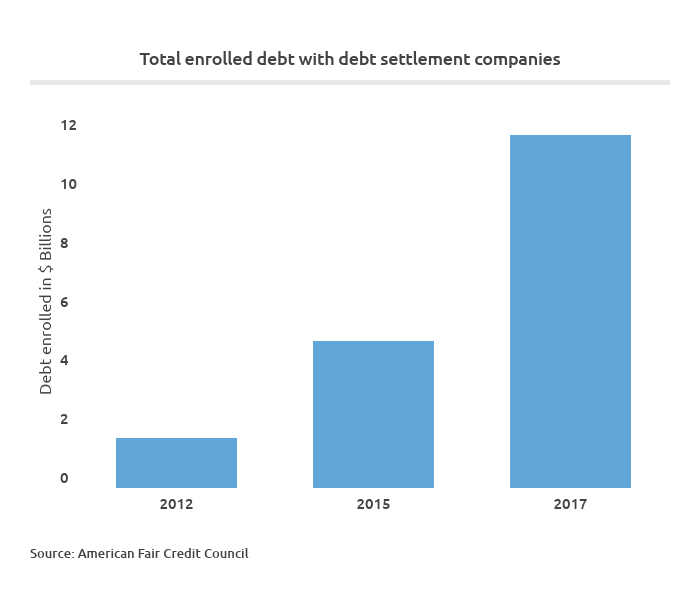 As of 2019, there are 32 states and the District of Columbia, where debt settlement is widely available. The lack of availability of debt settlement companies has had an effect on the total number of settlements and dollar amounts settled.

California and Texas account for 29% of all debt settlement dollars

California, Texas, Florida, New York, and Pennsylvania account for more than 50% of all debt settlement dollars. 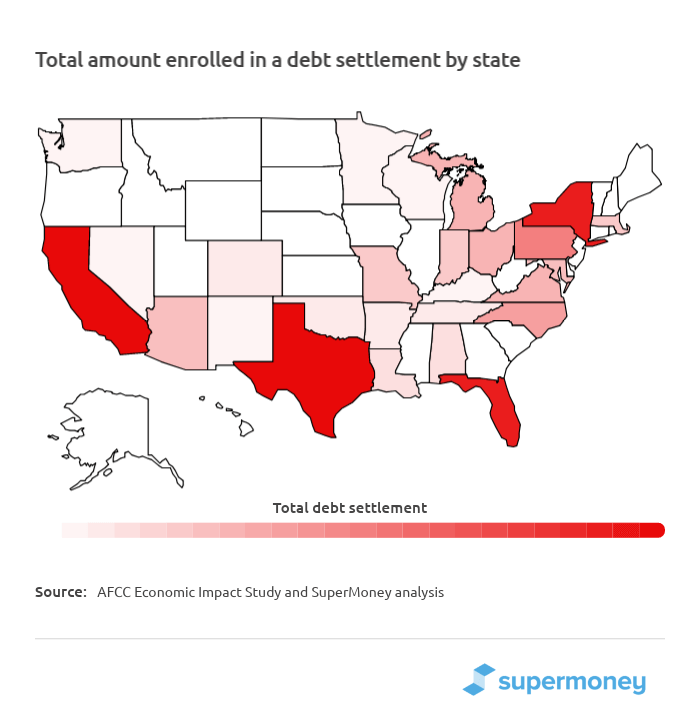 New Mexico has the highest debt settlement per capita 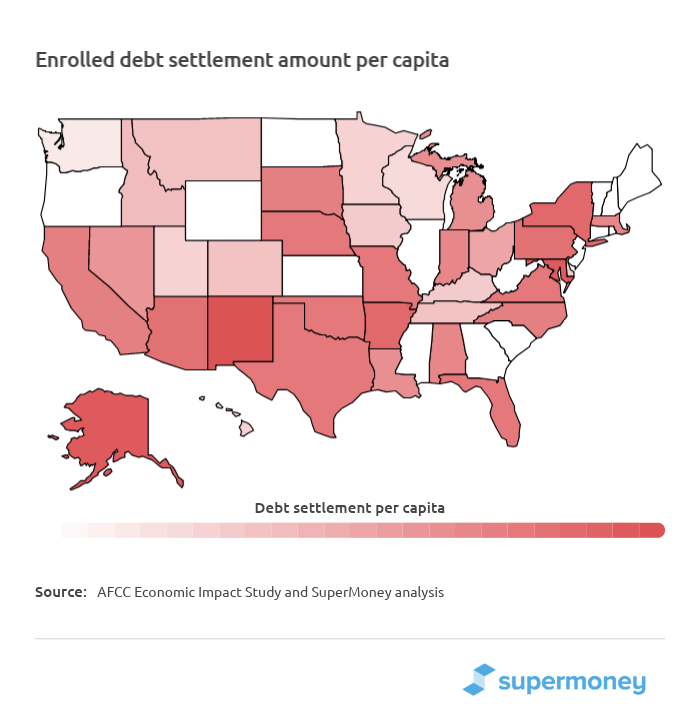 61% of households have full access to debt settlement firms

Debt settlements occur in all states, but because of government restrictions and regulations, it is harder for consumers to access professional debt settlement services in certain states. Not surprisingly, the number of settlements in those states is much lower. 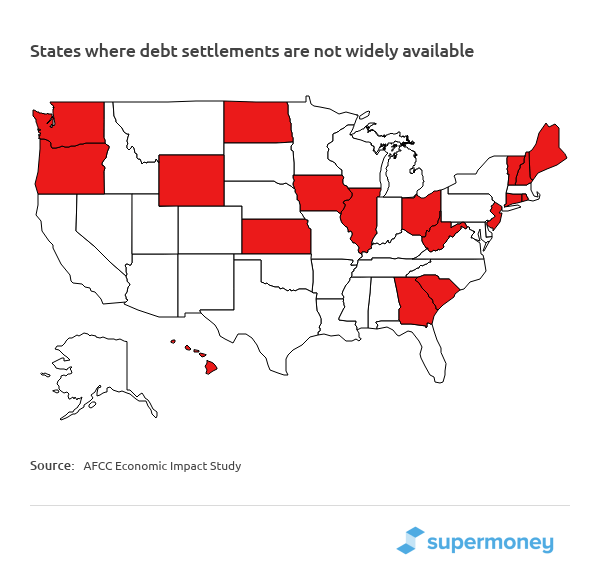 The average consumer in a debt settlement program has $6,223 in credit card debt 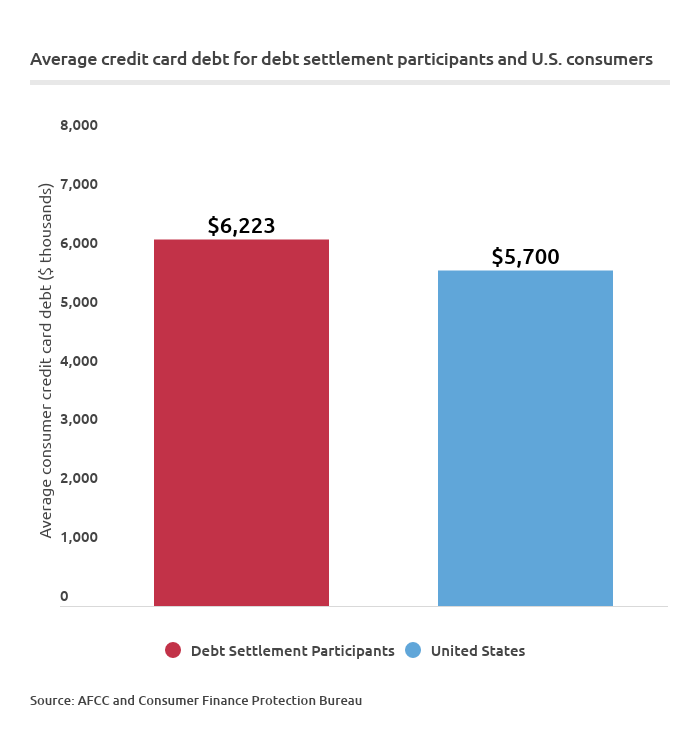 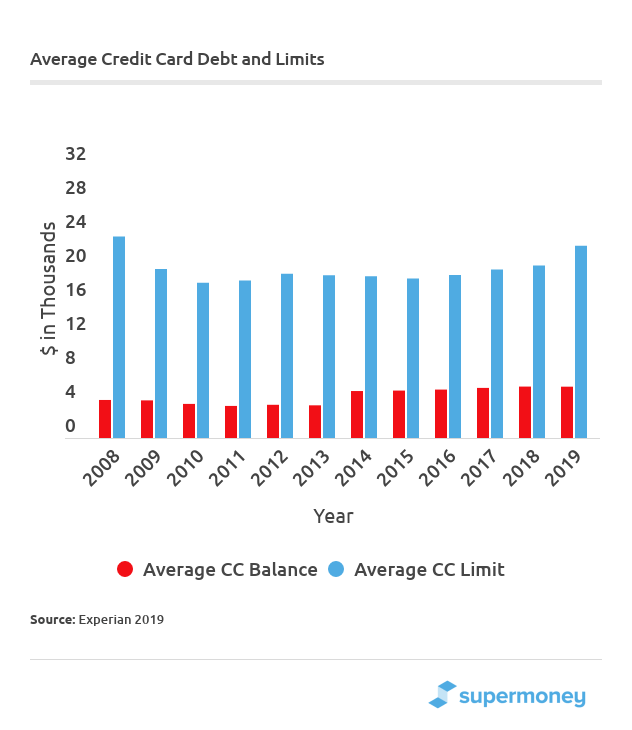 Similarly, 61% of consumers in debt settlement programs have attended college. In contrast, 47% of 25 to 29 year-olds had earned an associate degree or higher in 2018 (source). 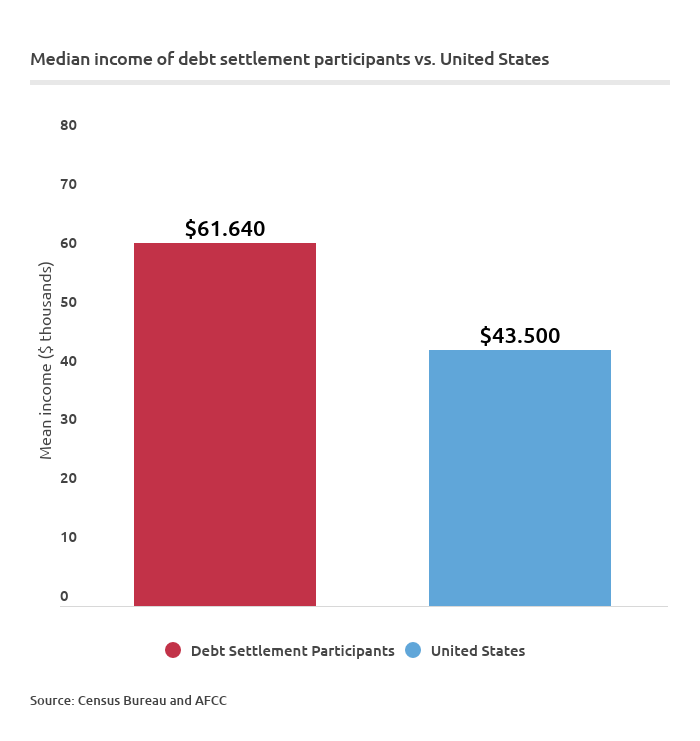 What is the history of the debt settlement industry?

As a concept, debt settlement has been around for thousands of years. In the United States, it has only been a widely available option for consumers since the early 2000s, mostly through lawyers that helped negotiate reduced payoffs for existing clients.

The growth of the debt settlement industry correlates with the increase of consumer debt in the United States. The loosening of consumer lending practices has made it easier for Americans to borrow money. However, new limitations to Chapter 7 bankruptcy protections 2005 made it harder for consumers to discharge their debts. This helped boost the debt settlement industry, which saw further growth with the Great Recession of 2007-2009.
The expansion of the debt settlement industry and the lack of regulation and consumer protections allowed debt settlement scammers to tarnish the reputation of the sector in the eyes of many consumers and regulators. One of the main issues was that, like bankruptcy attorneys, most firms charged fees to consumers before they settled an account. However, bad actors in the industry failed to deliver on their promised services leaving customers in worse financial situations.

Immediately after the adoption of the FTC rules, the number of accounts enrolled dropped dramatically as debt settlement firms adapted to the new model. Nevertheless, as consumers began to understand the benefits of the pay for performance model as opposed to the previous “pay in advance” model, the number of new enrolled accounts grew. 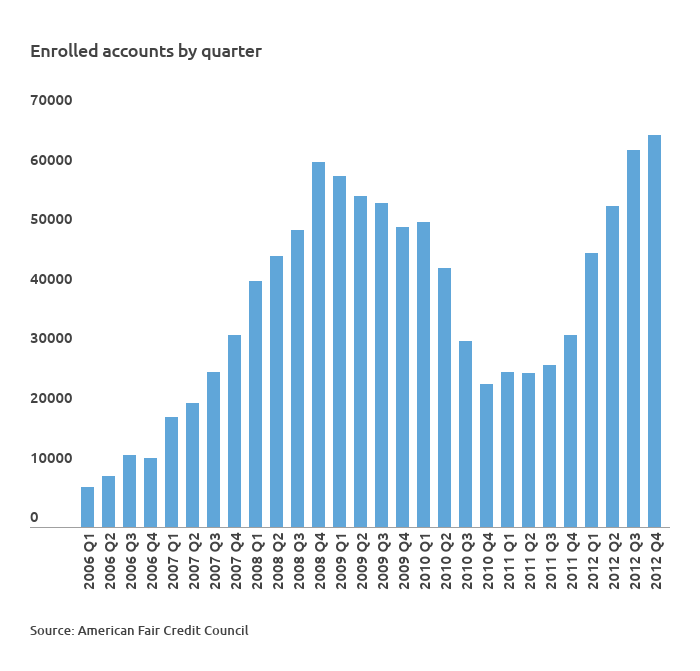 In the last 7 years, the industry has become more legitimized and grown considerably. The new regulations had the desired effect of excluding companies that didn’t have the capital to cover expenses while working on consumer accounts. However, the changes benefited larger and more established debt settlement firms that no longer had to compete with smaller firms that were squeezed out of the market.

An unintended consequence of the FTC rules may have been an increase in the fees charged to consumers because of the reduction of competition.

The recent growth of the debt settlement industry has occurred in a period when the purchase volume of consumers has grown faster than outstanding balances. After the recession, consumers borrowed less, and delinquency dropped to historically low levels. However, that trend has changed in the last two years.

Delinquency rates and charge-off rates are now above pre-recession levels. Delinquency is defined as a loan or credit account that is past due 30 days or more. Charge-offs are the value of leases and loans that lenders remove from their books and charge against loss reserves. The charge-off rate is a measure of the percentage of defaulted loans in comparison to the total amount borrowed.

Secured loans, such as mortgages and car loans, do not qualify for discharge in bankruptcy. Student loans, 90% of which are federal loans, are typically not eligible for bankruptcy either. Therefore, they usually don’t qualify for debt settlement programs. 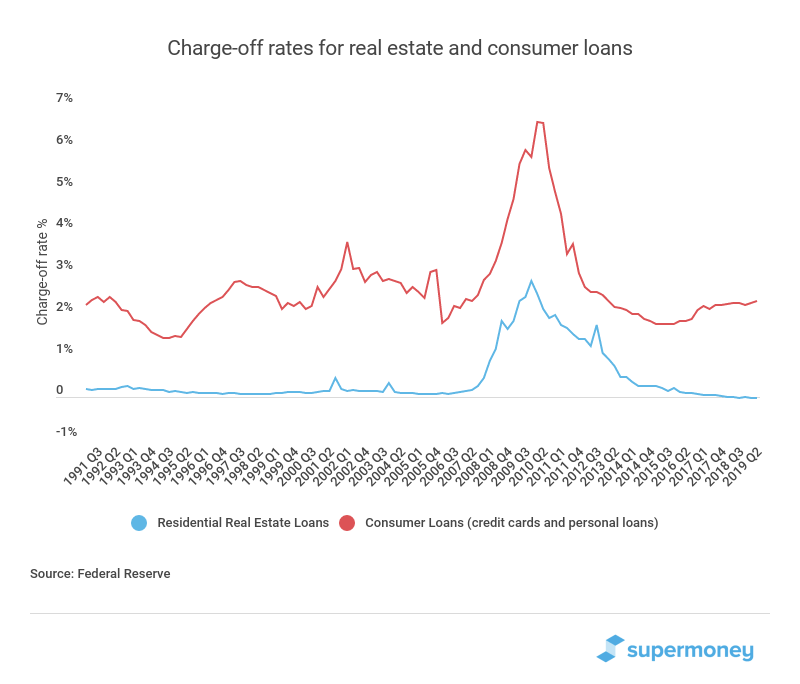 The delinquency rate for consumer loans (credit cards and personal loans) was at its lowest in the second quarter of 2015 (1.98%) and has since grown to 2.35%. Credit cards alone increased from 2.15% to 2.56%. Unsecured personal loans and credit card debt take the lion share of the accounts managed by debt settlement companies. If this trend holds, we can expect significant growth in the debt settlement industry. 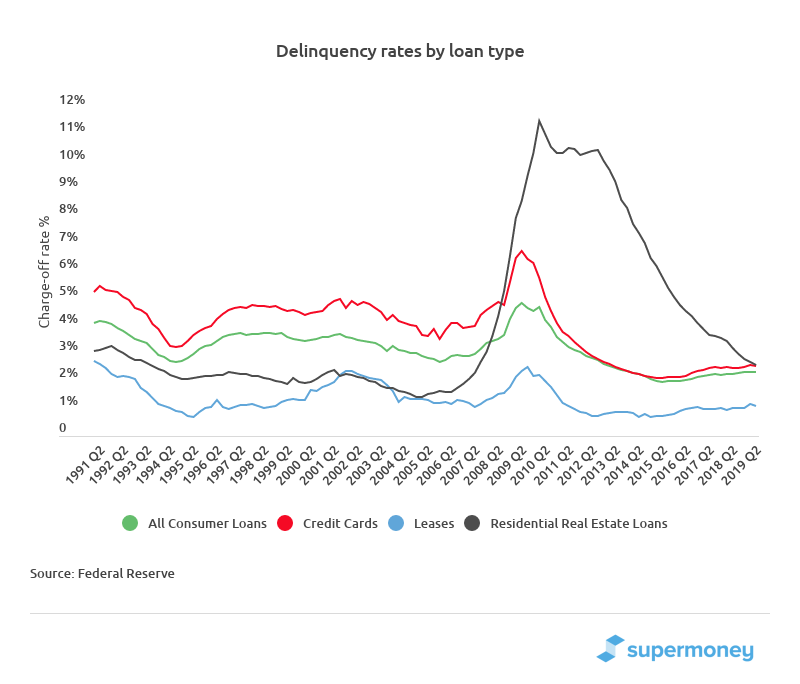 Most of the accounts enrolled with debt settlement companies are from credit cards and unsecured personal loans. That is because personal loans don’t leave lenders much of recourse once they report an account as delinquent to credit reporting agencies. 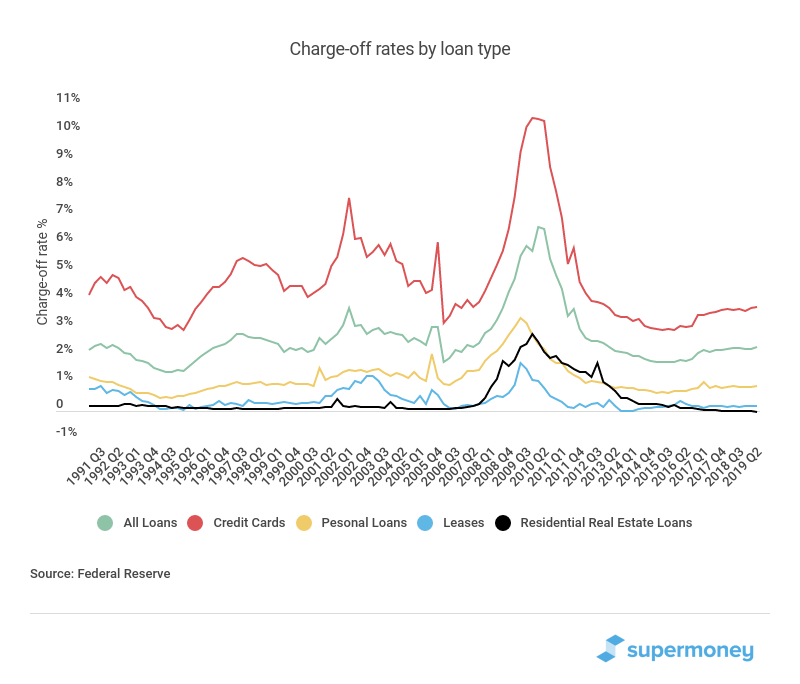 The future of the debt settlement industry

The latest household debt and credit report by the Federal Reserve Bank revealed that total household debt increased by $192 billion. That is a 1.4% growth over the first quarter of 2019 and the 20th consecutive quarter increase. 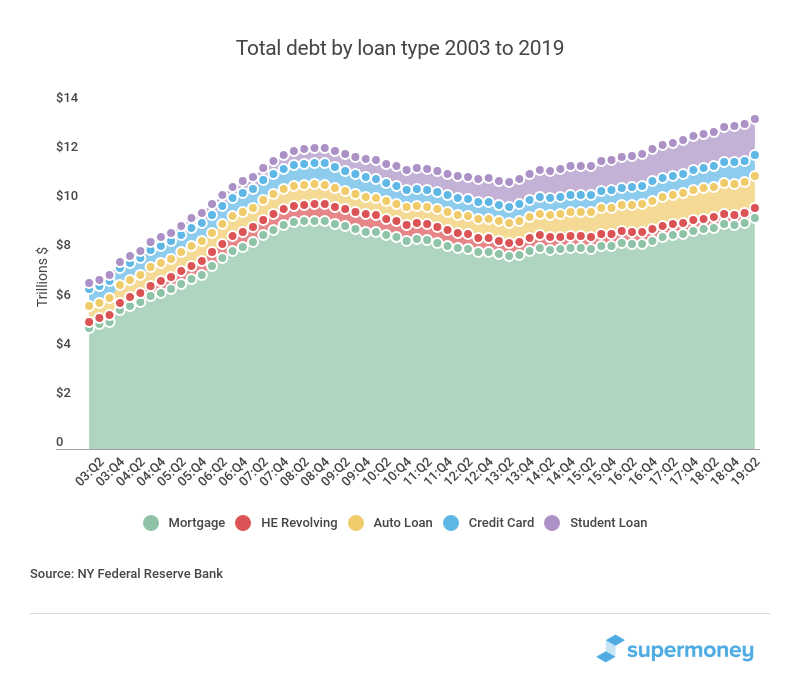 Check out other in-depth industry studies

Andrew is the managing editor for SuperMoney and a certified personal finance counselor. He loves to geek out on financial data and translate it into actionable insights everyone can understand. His work is often cited by major publications and institutions, such as Forbes, U.S. News, Fox Business, SFGate, Realtor, Deloitte, and Business Insider.