Selling blood plasma is big business in the United States. It’s run by large corporations, such as Baxter International and Grigols, that bleed the most impoverished communities (source) to fuel a multibillion-dollar industry.

Many developed countries have banned the commercialization of blood, but in the United States, it’s the 10th most valuable export product. The laxer U.S. regulations also allow people to donate up to 104 times a year (twice a week).

When you think of U.S. exports, blood probably does not come to mind. However, blood is the 10th most valuable export (source) and rivals classic American exports, such as cars and computer chips, and is bigger than soybeans, corn, aircraft parts, and gold exports (source). 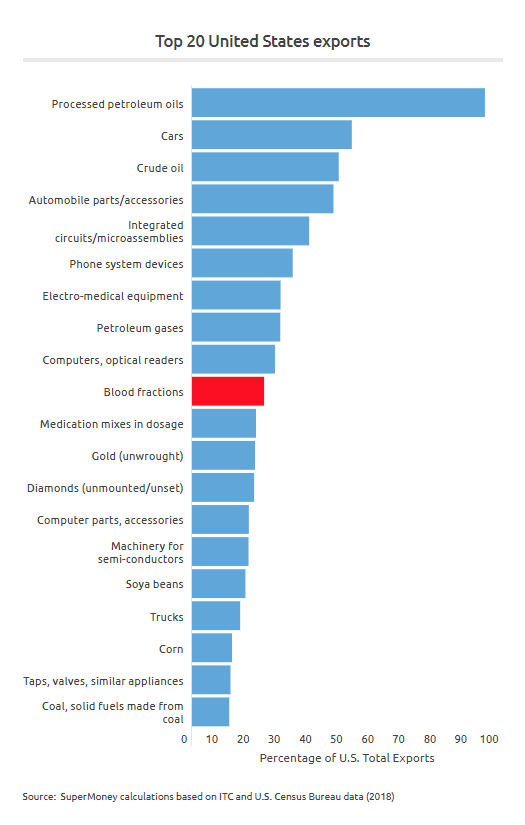 Let that sink in. The United States is a leading automobile manufacturer with a total export value of $56B in 2017. However, blood sales in the same year hit $28.6 billion, which represents over 50% of total car sales. 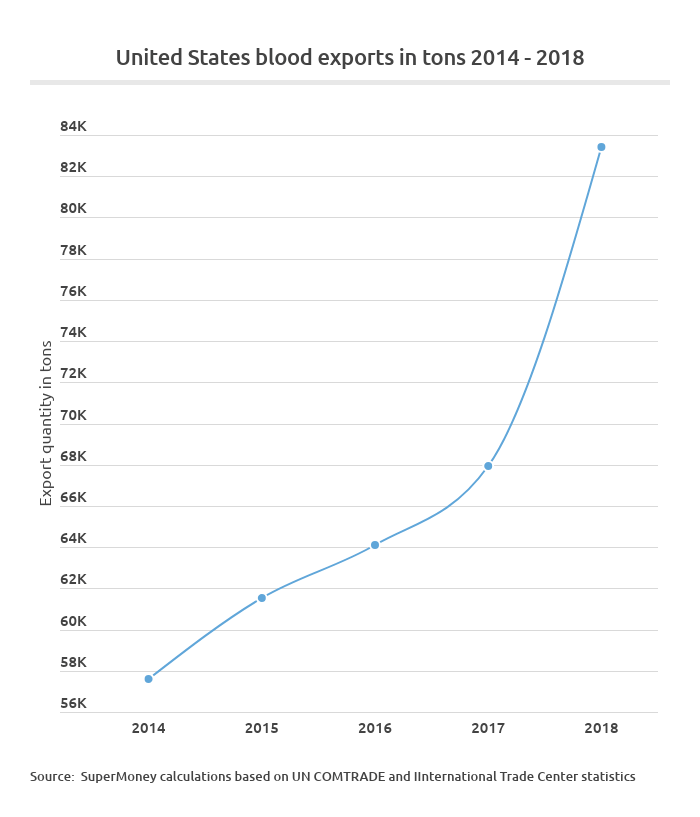 The U.S. provides 70% of the plasma used worldwide (source). This is because the U.S. allows donors to receive compensation for their time. Donors are also allowed to donate up to two times a week. Most developed countries limit it once a week and don’t allow donors to receive compensation, which may have something to with why the U.S. supplies 94% of the World’s paid plasma (source). Most of the plasma donated in the United States is sold to European countries, Canada, Japan, and China. 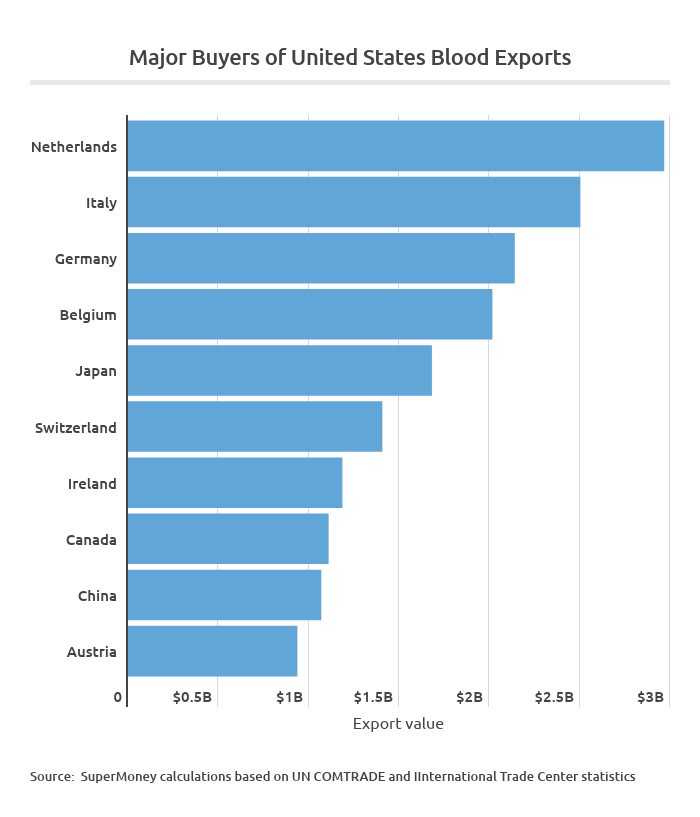 The United States is by no means the only country to export blood. In fact, it is the fourth-largest exporter when you include human and animal blood products for therapeutic purposes — not just plasma. Blood exports are concentrated around a small group of developed countries. The top 10 exporters control 89% of the $180 billion global blood market. 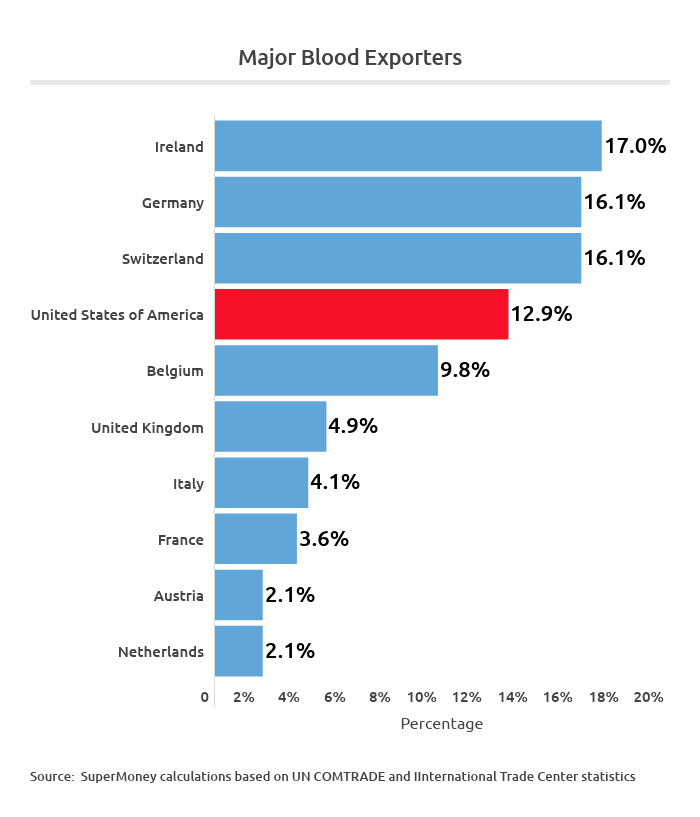 An industry fueled by low-income donors

The industry depends on a mix of low-income workers, homeless, disabled, single parents and college students who rely on the extra income plasma donations provide. It’s no coincidence that nearly 80% of plasma centers in the United States are in poor neighborhoods.

The compensation per donation — which takes around 90 minutes — is $30 to $60. Typically, first-time donors get paid the most. After a few donations, payment is based on body weight.

According to one study, a liter of plasma costs approximately $150 to obtain and can be sold for around $500, depending on the country and fractioning method (source).

What are the health risks?

A 2010 study found that donors had fewer proteins in their bloodstream, which could increase their risk of developing kidney and liver diseases. The repeated injections can also cause scar tissue to develop, and harden the veins of donors.

Plasma is derived from whole blood, which is drawn from the donor. The plasma is then separated from the red blood cells and other fractions. These are returned to the donor with a sterile saline solution to help the donor’s body replace the plasma removed from the whole blood.

The process of donating blood and plasma are so similar they are often confused. However, there are significant differences. Plasma donations take longer, include significant health risks for long-term donors, and you can get paid for them.

You can, in theory, get paid for both blood and plasma donations. In practice, nobody pays for whole blood. One reason is the FDA requires commercially acquired whole blood to be labeled as such, and hospitals will not use it. However, plasma doesn’t have to be labeled like this. A second reason is that whole blood must be used within 42 days (source), but plasma can be frozen and stored for up to 10 years, which makes it easier to commercialize (source).

The World Health Assembly passed a resolution in 1975 urging member countries to promote national blood services that relied on voluntary donations without payment. This is for safety and to avoid exploiting donors (source).

One of the concerns is people are more likely to lie about their health condition if there is money on the table. Multiple studies (source), such as the 1997 report by the Government Accountability Office that pointed out that plasma donations, which were compensated, had 2 to 20 times higher rates of HIV than whole blood donations (source). The World Health Organization does approve of small tokens of appreciation to donors, which haven’t affected blood safety (source).

However, many of the World Health Assembly members who ban payment to donors struggle to satisfy their need for and plasma and import it from countries that do, such as the United States.