Annual contract value (ACV) calculates the revenue generated from a single contract normalized over a year. Together with annual recurring revenue (ARR), analysts are able to determine the financial health of a company, as well as its revenue growth prospects. This metric is typically associated with subscription-based services in which the client is paying a subscription or licensing fee to use the product.

A business uses multiple metrics to determine its financial health. One of the most valuable metrics for businesses involved in subscription-based services is the annual contract value (ACV). Though not used by every company, ACV determines the revenue generated from a contract over a year. This differs from a company’s annual recurring revenue (ARR), which calculates the revenue generated from every contract a company sells.

By understanding both concepts and how to calculate ACV or annual contract value, you stand to gain much more insight into both the company’s current health, as well as its growth prospects.

ACV is a popular sales metric used by SaaS businesses that primarily get their revenue from customer subscriptions. It effectively estimates how much a contract with an individual customer is worth over the normalized course of a year, essentially a customer lifetime value.

Depending on the business, ACV calculations may also include one-time fees or setup costs, but this is not always the case.

Why is ACV important?

For companies who generate most of their revenue through subscription-based services, the ACV helps compare various contracts and customers to determine where the most revenue is coming from. Using this metric, sales teams are able to prioritize certain contracts over others and have a general understanding of their performance, and how to improve it.

How to use ACV in business analysis

Obviously, businesses have multiple customers buying various products, sometimes in different timeframes. Once you have calculated the individual ACVs of your individual customers, you can calculate the ACV of your business. 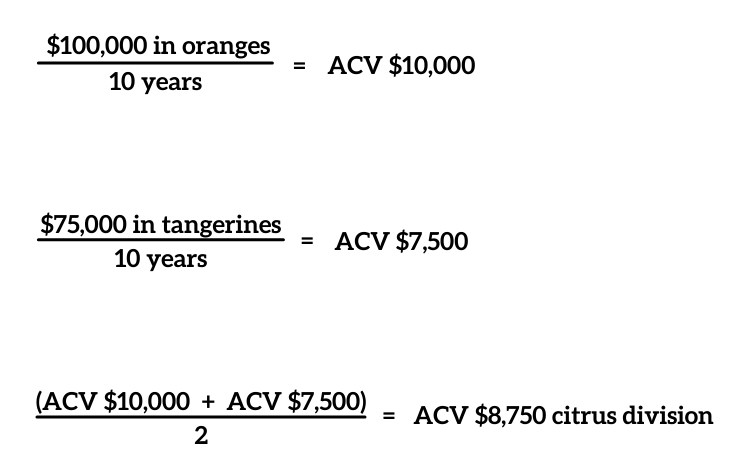 When analysts look at the company, most likely, they will see the front-line explanation that the average value of the contract, or ACV, of the citrus division is $8,750. They can then delve into the details and see that the reason for this is because the commodities company is selling oranges for a higher price and tangerines for a lower one.

A simple strategy to increase the ACV of the citrus division would be to sell more oranges and fewer tangerines. This is a simple, yet effective, way of analyzing if companies are maximizing their markets and tracking revenue growth.

How to calculate ACV in a monthly subscription service

Let’s say for example, that the subscription price of your monthly streaming service account is $10. This means that every month you are paying $10, which will cumulate over a 12-month period into a total of $120 per year.

This is the key to understanding the concept of ACV. Businesses use ACV to value each customer’s contract with said business over a normalized yearly period. In this case, the ACV of an individual subscriber who pays $10 is a yearly total of $120. The ACV, in this case, is $120 for each of the customer contracts subscribing to this standard annual streaming package.

How to calculate ACV for a longer time frame

Sometimes a subscription is defined by a more extended period of time. For instance, let’s say that you are a commodities trader looking to sell some oranges. Because of the logistics involved, a customer or business might want to take out a “subscription” for a longer term.

Let’s revisit Restaurant XY, who now wants to buy only the oranges over a 10-year subscription period for the price of $100,000 for the entire contract. You sign the contract and develop a payment structure that is suitable for both parties. In this case, you will divide rather than multiply to ascertain the ACV of Restaurant XY as your customer.

ARR stands for annual recurring revenue. Like ACV, this is a key factor when measuring a company’s health. However, ARR is calculated differently than ACV.

How does ARR differ from ACV?

Though both ARR and ACV calculate contracts over long periods of time, the two calculations reveal different information about a company’s financial health.

One of the most significant differences is what each calculation highlights. ACV determines the revenue a single subscriber contract will bring the company for the duration of the contract. ARR, on the other hand, calculates the revenue from all annual contracts in a 12-month period. Another important difference is that ARR does not provide accurate information for contracts shorter than one year long.

These are just some of the key differences between these calculations. For a more complete comparison, review the list below.

How to use ARR for business analysis

When analyzing ARR, an investor will typically use percentages based on previous data, rather than calculating each case one by one.

Looking for companies that have high ACV growth projections that you might want to invest in? Our recommended advisers can help.

Example of ARR calculation in business

Let’s say that an analyst is looking at your streaming subscription and using it to calculate ARR. In this scenario, the analyst is taking into account the other factors that might affect occurring annual revenue.

However, some people want to add cool features and upgrades to their streaming plan. Maybe you purchased this subscription plan in January, but by June, you want to upgrade to a better service.

In order to compare metrics accurately, you need to factor this in. That additional service is an extra $2 a month. If we plug it into that equation, we arrive at a higher ARR. Remember, you only have the subscription for six months out of the year that you are getting the upgrade, so this needs to be taken into account.

What is sales ACV?

Sales ACV is just ACV, which determines the revenue generated from one subscription contract that is normalized and averaged over a year. You can do this by either multiplying a monthly subscription or dividing a subscription that encompasses years rather than months.

What is ARR vs. ACV?

ARR is the revenue generated per month on an annualized basis. However, it must take into account added features and upgrades, as well as possible cancellations. ACV typically does not take this into account.

Note that this is different from one-time costs. ACV may include one-time costs such as installation, setup, or cancelation fees, but ARR ignores that.

Is ACV the same as revenue?

ACV is not the same as revenue. ACV is merely a way to measure the aggregate amount of customer contract values. It does not consider changes in the short term, such as upgrades and cancelations.

What is growth ACV?

Growth ACV tracks the change in the average contract value over time. The calculation for this metric is as follows:

For instance, let’s say your company made $120 per subscriber last year, averaging $10 per month for your services. This year you’ve increased the price of your basic subscription plan to $15, resulting in an ACV of $180. Using this information, you calculate that your growth ACV is 50%.