When traders invest in the stock market, they use a variety of metrics in their technical analysis to determine which way the price of an asset might move. One aspect they will surely pay attention to is time. Traders will use something called a “moving average crossover” to determine the performance of an asset based on its short-term average performance vs. its long-term average performance. If these two averages cross in a certain way, it can indicate the direction of the market. The golden cross, if identified correctly, indicates a bullish uptrend over the long term. Just like other chart patterns, such as the double top/double bottom pattern, ascending triangle pattern, or cup and handle pattern, a golden cross helps traders decide when to buy or sell the asset.

It’s important to note that there are no guarantees when using chart patterns in technical analysis. Chart patterns are only an indication of what might happen to an asset’s price.

What is a moving average?

What is a moving average crossover?

What makes up a golden cross? 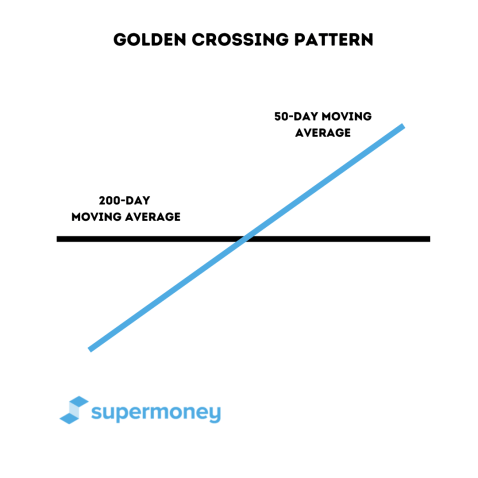 Some traders describe three stages of a golden cross, but we have divided it into four stages to be as clear as possible. A trader needs the following to confirm a golden cross.

Golden crosses can be great indicators of a bull market, but they can lag. It’s best to learn as much as possible before you invest. Here are some advisors that can help you get started making smart investments.

Real-life example of a golden cross 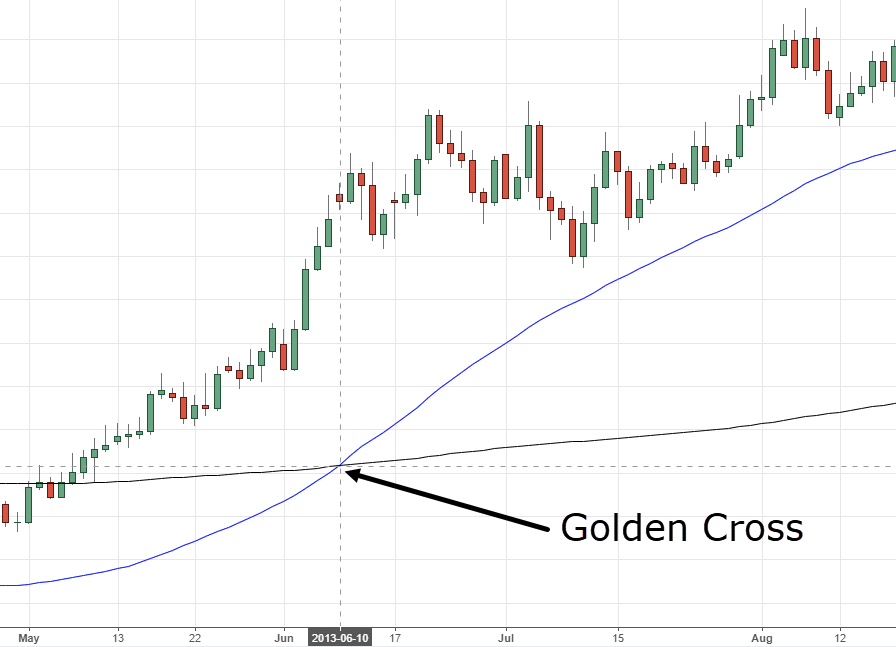 It does not cross the long-term moving average, however, until around the middle of June. After these lines form their golden cross, there is a consistent uptrend representing a prolonged bull market. If a trader decided to buy in May, the stock would have performed better than if he had waited until the golden cross formed. However, the trader may have wanted to wait for the cross to form to confirm the pattern. This is the primary issue traders face with the golden cross. As the pattern lags, traders are handcuffed from getting in at the earliest possible position if they want to confirm the pattern.

Why does a golden cross occur?

A golden cross will most likely occur at the end of some sort of downtrend, as explained above, either short-term or long-term. The downtrend consisted of sellers pushing the price of the asset down during the downtrend but starting to lose momentum as the downtrend nears the bottom. In many cases, you will see a drop in volume as the asset price bottoms out. Remember, when looking at immediate trends, we consider the 50-day moving average rather than the 200-day moving average, which is more accurate as to the current price movement.

Why does the short-term (50 days) move up quickly?

Once the bottom has been determined, you should see an uptick in volume and buy orders from the seller pushing the trend line up. This indicates that there is a consistent uptick in price over the shorter time frame contributing to the slightly higher-angled 50-day moving average. As the trend gains momentum, there should be an increase in high-trading volume from the buy side. This indicates that we are in store for a long-term bull market.

Why doesn’t the long-term average move up as quickly?

When would a trader open a trade?

A trader will open a trade with a golden cross at different points depending on his trading thesis and other technical indicators. Remember, these are moving averages. The asset price might move above the long-term moving average but still not have enough momentum for the 50-day moving average trend line to cross the 200-day average trend line. Traders who are extremely bullish on the asset and want to move aggressively will put in a buy order when the asset price (not the price average) breaks the 200-day trend average. More conservative traders will wait until the lines actually cross before putting in a buy order.

How traders manage the downside

Death crosses and golden crosses typically indicate long-term trades in which a market is due for a bear run or a bull run. However, if identified incorrectly, the pattern could represent another technical pattern. A more aggressive trader might even opt to put a stop loss at a price point below the breakout point and at a point when the average price is even lower than the breakout point. This gives them room to absorb deeper retest levels, with the thesis that no matter what, an upward trend will continue. A more conservative trader might opt for putting a stop loss above the breakout point. They might be fearful that any retest could, in fact, be a break to the downside, meaning this pattern was falsely identified.

When you’re ready to invest, these brokerages can help you determine where to put your money for the best results.

Is a golden cross bullish or bearish?

A golden cross signals a bullish market and a longer-term bull trend. It is the opposite of when a death cross occurs, which indicates a longer-term bearish trend.

Does the golden cross strategy work?

Golden cross trading can work if the pattern is identified correctly. However, as the pattern consists of moving averages that can lag, traders might not get in at the absolute best time to buy the asset (the bottom). It should be used with various other forms of technical analysis to utilize its value.

What time frame is best for a golden cross?

How do you use the golden cross strategy?

You will utilize a golden cross strategy if you have a bullish thesis on the asset, based on other technical analysis. You can use it as a strategy to determine when to get into the market.

Is the golden cross a good indicator?

As with most patterns, a golden cross should be utilized with various other forms of trading analysis. Golden cross trading strategies also incorporate data that consists of moving averages, which lag. However, it can be a good indicator that the market is in the process of a decently long bull run. It can be used to determine when to get into the market, similar to a double bottom pattern or a descending wedge pattern.

What happens after the golden cross?