Every day in our lives, we make choices about what we buy. Are we going to go to Dunkin’ Donuts for a cheap regular coffee, or are we going to splurge at Starbucks for a Caramel Frappuccino? Typically our spending habits are governed by our income and the money in our pocket. If we have a little extra money coming in, then we might opt for that Caramel Frappuccino. Likewise, if times are tight that month for whatever reason, we might stick to cheap Dunkin’ coffee with a religious fervor. Like most consumer behavior, these types of choices are monitored and calculated by the rules of modern economics.

What is an inferior good?

An inferior good is a term used in economics to explain the behavior of consumers. Effectively, when incomes rise, consumers’ desire to purchase inferior goods will drop. This is due to the consumer having more variety of choices as they have more money.

A classic example of this can be illustrated with a Dunkin’ coffee and a Starbucks coffee. They are both coffee, but Starbucks is generally considered a better quality of coffee, and the price reflects this. Although a consumer might require coffee every day to get their morning started, their choice of a Starbucks coffee over a Dunkin’ coffee is dictated by their income. If times are good and the economy is growing, consumers might start to opt for Starbucks coffee more frequently. In this scenario, Dunkin’ Donuts’ cheaper coffee can be classified as an inferior good in economic terms.

There are several types of goods that pertain to the income elasticity of demand. These include inferior goods, normal goods, luxury goods, and inelastic goods.

Looking to figure out where the economy is heading and in which cycle? Creating a well-diversified portfolio can help you counteract a bad economy with high inflation.

Another term used in economics to define consumer behavior is normal good, or necessary good. Contrary to inferior goods, demand for normal goods rises when incomes increase. An example of a normal good is organic coffee. If a consumer is low on income, they might stick to Folgers. However, if a consumer’s income rises, they might only buy organic coffee. This works as the direct opposite of inferior goods, which you can see in the graph below. 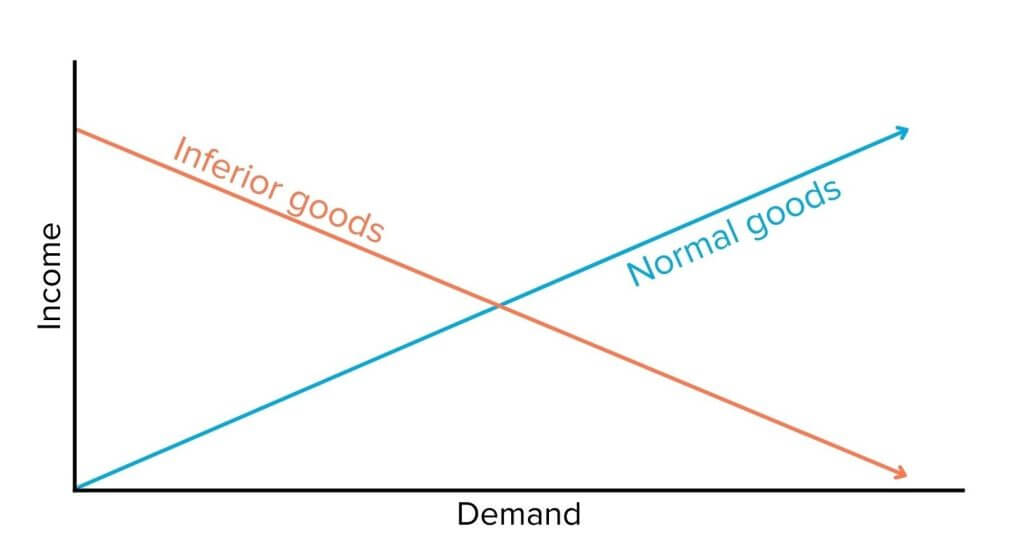 Luxury goods are a separate category from inferior goods and normal goods. Luxury goods are goods that are not considered necessary to survive. People buy luxury goods not only when their incomes rise but when they have a good amount of wealth and assets to spend. Examples of luxury goods are Rolex watches, Lamborghinis, and fine art.

Now that we understand how the different types of goods are measured in modern economics, what exactly constitutes inferior goods in the life of your average human being? Here are some examples.

Affordable transportation is a classic example of an inferior good that most people will use at some point in their lives. Let’s say you graduate college and get a job with an average income. At this point, because you are just starting out, you need to take a bus and a subway to get to work. However, once your income rises, you might opt to buy a car and use that instead. Thus, your use of public transportation such as buses and subways will fall, whereas your car use will increase.

Where you sleep and eat, either in your normal life or when you travel, could be defined as an inferior good. For instance, say that you like visiting the mountains in Yosemite National Park. When you first go there, you might opt to stay in a tent on a camping ground. However, as you begin to build more income, you might opt to stay in a hotel or a hybrid “glamping” scenario.

Food and drink are other common examples of goods that can be inferior. For instance, when people are in college and have little money to spend, they often opt for cheap beer, such as Keystone Light, and ramen noodles. However, once they graduate and have a job for a few years, they might opt to buy nice bottles of wine from Mendoza, Argentina and more expensive meals. The cheap beers are considered inferior goods in this scenario, as demand falls when people have more money to spend.

An easy example of inferior goods can be seen in people’s choice of brands when they shop. Almost every grocery store in the US will have its own generic brand. These are usually based on other products from name brands that have become popular. For example, if you love Lucky Charms but have limited money, you might opt for the generic imitation that the store provides. Once your income rises, you might drop the generic Charms for the full-on Lucky Charms that you always craved.

In 2008, the United States underwent a systemic shock to its economy due to the subprime mortgage/financial crisis. A brutal recession immediately followed. However, because incomes declined due to the crisis and subsequent recession, sales for these two dollar stores actually increased.

For the three months ending in February 2009, at Family Dollar, sales actually increased 6.4% versus the same time the previous year in 2008. A similar scenario happened with Dollar Tree, which at the time had more than 3,600 U.S. stores. According to the New York Times, “Timothy J. Reid, vice president of investor relations for Dollar Tree, said the company had a 3.7 % increase in the number of transactions in 2008 compared with the previous year.”

This runs contrary to what most people think about economics. You might assume that all businesses will do poorly in a bad economy. This is not the case for businesses that specialize in inferior goods, such as dollar stores. In times of contraction, they will do well.

If you are convinced that there might be a recession or some other unforeseen event that will cause incomes to go down, then investing in stocks of companies like Dollar Tree that focus on inferior goods could be a smart decision.

What are superior goods?

Superior goods are goods like normal goods and luxury goods. The demand for them increases as incomes rise.

What is an inferior good meaning?

An inferior good is a good whose demand falls as income rises.

Is fast food an inferior good?

Yes, fast food or cheap food, in general, is considered an inferior good.

What are examples of normal and inferior goods?