There are certain things humans always need, regardless of background and lifestyle. Whether you’re a king or a pauper, you still need essentials like food, water, and shelter. In modern economics, these necessities that must be expended regardless of income are referred to as autonomous consumption.

Autonomous consumption refers to the needs that an individual must meet, regardless of whether they have any income at all. Suppose someone is not able to cover their essential expenses with their current income. In that case, they must either dip into their savings or go into debt. As people need essentials in order to survive, an individual has no choice but to meet those needs, even if it means taking out debt with high interest rates. 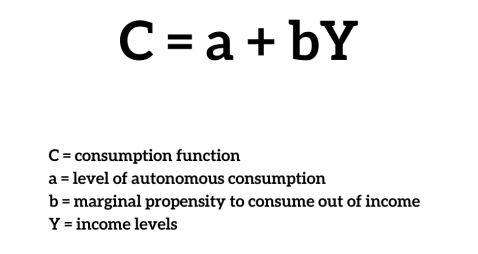 Say you make $5,000 per month. Every month, after you receive your salary, you pay all of your essential bills, such as rent and groceries. After you pay these bills, you are left with $2,000 a month. That extra $2,000 a month is called discretionary income or disposable income.

Unlike autonomous consumption, discretionary spending and induced consumption are directly correlated to income level. Take vehicles such as cars or trucks, for instance. Cars and trucks can make life easier, but they are not fundamental to a human being’s existence. Likewise, if you can afford a car, that doesn’t necessarily mean that you need a Porsche instead of a Toyota Camry.

The ability to buy nonessential items is directly correlated to your income level. Those with more discretionary income can afford a greater level of induced consumption, such as buying a Porsche and tricking it out. Meanwhile, those who have a lower level of discretionary income might be relegated to a 5-year-old Toyota Camry with no frills. Regardless, as neither is fundamental, neither is considered autonomous spending or autonomous consumption.

Looking for a credit card with great rates to increase your discretionary spending? Here are some options for you.

To give you an idea of how this works out in real life, let’s use the real-life example of Samir. Samir is located in Denver, Colorado, and works as an IT professional making around $10,000 a month. He spends about $1,000 whenever he and his wife visit the grocery store, and he spends about $4,000 a month on the mortgage for his house in Highland.

Samir also loves to watch TV; he pays $200 a month for the Altitude sports package so he can watch the Nuggets and Avalanche games. He’s an avid traveler and spends about $12,000 on an annual basis, which equals $1,000 a month. Furthermore, his private exercise and aerobics classes cost an additional $800 a month. By putting together a monthly budget, he can get a clear picture of his autonomous spending versus his discretionary spending, as explained in the chart below.

Autonomous consumption can shrink or grow

Autonomous consumption is inevitable, as it is fundamental to the existence of human beings. However, this does not mean that it’s always a fixed number. While you always need a roof over your head, you can downsize your home and pay less for your mortgage. Likewise, you always need food to eat and heat to stay warm, but you can change your habits to save money, such as cooking at home more often or wearing layers to avoid running the heater for too long. In these cases, you can shrink the impact of autonomous consumption on your finances.

Similarly, autonomous consumption also has the potential to grow. Such growth is typically a response to factors such as future income and a strong overall economy.

Sometimes, your current income will not cover the costs of your autonomous spending. If this happens, then you’ll need to go into debt or dipping into your savings. This process is called dissaving, also known as negative saving. For example, if your rent is due and you need to borrow money from a friend to pay it, you are engaging in an act of dissaving.

Economists factor dissaving into their analyses of the overall health of the economy. If the income of the aggregate is less than the overall autonomous consumption, economic growth is slowed and the economy must go into debt in order to continue to operate.

Basic standards of living need to be met in order for an individual to survive. However, this does not mean that you need to dip into your savings only for the purpose of covering your basic necessities. If you have significant savings set aside, such as for retirement or a major purchase, you can engage in a little dissaving to put that money toward discretionary expenses. After all, that’s what a savings account is for!

Likewise, when an economy is in depression or stagnating, it can cause autonomous consumption to fall greatly. Take the housing market, for example. You need shelter, but if your country is currently experiencing a depressionary cycle, then you might hold off on getting a larger home while you wait for the market prices to drop. This can cause a downward spiral in which people continually lower their autonomous consumption.

Most of the governments and economies in the world today operate on the principle of Keynesian economics. This is the idea that government expenditure, low interest rates, and tax cuts will lead to flagging. When an economy is on a downward trajectory, governments will typically enact some sort of spending program to boost growth. In many cases, these programs will attempt to address issues related to autonomous consumption. Social Security and food stamps are examples of fiscal programs in the U.S. that are utilized to boost the economy and address shortfalls in autonomous consumption.

What is the autonomous consumption formula?

What does “autonomous” mean in economics?

In economics, an “autonomous” expenditure is spent or consumed regardless of income. Basically, it refers to essential goods that must be consumed to survive.

What’s the difference between “consumption” and “autonomous consumption”?

Consumption is merely the act of consuming something, whether you need it or not. Autonomous consumption refers to necessary consumption, that is, what you need to consume no matter what.

What is another name for autonomous consumption?