Remember the good old days when you knew the man on the phone claiming to be an IRS officer was a scammer. After all, the IRS never calls to collect overdue tax. The sage advice was to hang up and call the IRS. Sadly, that’s not the case anymore.

The IRS started a new private debt collection program in the Spring of 2017. The new plan allows a private collection agency to collect overdue tax on behalf of the government. Each year, the United States averages $406 billion in uncollected tax debt. That is a lot of unrecouped money Uncle Sam wants to collect.

Why is the IRS going with a private debt collection program?

The IRS private debt collection program targets taxpayers the IRS has long ignored because of lack of resources. However, they could collect up to $2.4 billion in unpaid taxes over the next 10 years, according to an estimate by the Joint Committee on Taxation’s estimate (source).

From the IRS’s perspective, one of the advantages of using private debt collection agencies is they can use more aggressive tactics, such as calling taxpayers by phone, that the IRS cannot employ. However, they still have to respect taxpayer rights, which includes the protection afforded by the Fair Debt Collection Practices Act.

The concept of hiring a private collection agency for tax debt collection is not new.

“Versions of the current private collection plan were tried out in the 1990s and 2000s. Every one of those experiments failed. The incentives for these private contractors are poorly implemented and even if all these private collectors acted reasonably and ethically – a big “if” considering their track record – they are set up for failure because they don’t possess the resources and expertise available to the IRS.” Harry Langenberg

“Versions of the current private collection plan were tried out in the 1990s and 2000s,” says Harry Langenberg, founder of Optima Tax Relief.  “Every one of those experiments failed. The incentives for these private contractors are poorly implemented, and even if all these private collectors acted reasonably and ethically – a big “if” considering their track record – they are set up for failure because they don’t possess the resources and expertise available to the IRS.”

At least four senators believe contractors are in clear violation of the tax code. In a letter to Pioneer Credit Recovery, Sherrod Brown, Jeff Merkley, Benjamin Cardin, and Elizabeth Warren stated, “We are concerned that Pioneer may be (1) failing to adequately protect taxpayers from criminals posing as IRS agents; (2) pressuring taxpayers into risky financial transactions; (3) violating the Fair Debt Collection Practices Act (FDCP A) and provisions of the Internal Revenue Code; and (4) violating IRS guidelines and provisions of Pioneer’s IRS contract. We urge you to remedy these matters and to end potential taxpayer abuse immediately.” 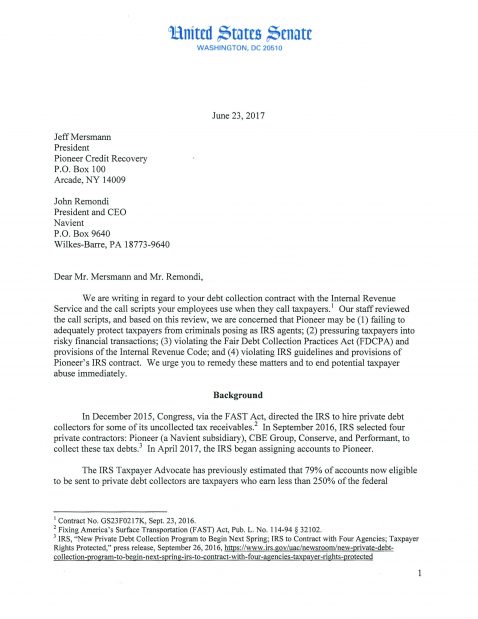 The National Taxpayer Advocate has also expressed concern about the practices and legality of private debt collection agencies. In its latest report to Congress, the National Taxpayer Advocate reported that “the IRS is implementing a PDC [Private Debt Collection] program in a manner that is arguably inconsistent with the law and that unnecessarily burdens taxpayers, especially those experiencing financial hardship (source).

What are the concerns with private debt collection?

Historically, there have two main violations by collection agencies when it comes to tax debt.

First, all four private contractors are offering taxpayers installment agreements that last up to seven years. The code that authorizes the IRS (26 U.S. Code 6306) to hire private tax collectors specifies a maximum of five years.

The other concern is the language collectors use when talking to taxpayers. The senators’ letter singled out the scripts used by one of the private contractors, Pioneer Credit Recovery. These scripts instruct employees to suggest taxpayers use their 401(k) funds, get a second mortgage, or use credit cards to settle their tax debt. 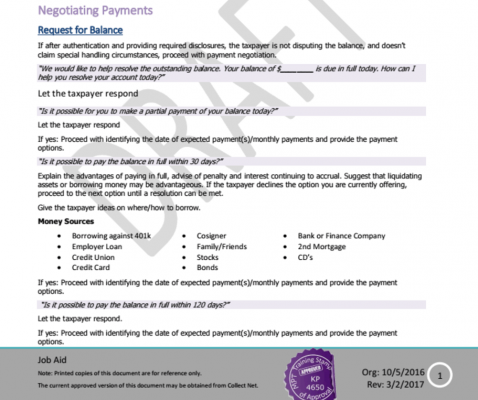 This is not the first offense for Pioneer Credit Recovery. In 2015, Pioneer was one of five companies fired by the Department of Education for questionable collection tactics.

“These private collection companies are paid on commission [to the tune of 25%], so they’re going to push the limits to maximize revenue,” says Brad Paladini, a tax attorney with Paladini Law.

“These collection companies tell people to pay their tax debts by liquidating retirement accounts, taking out second mortgages, and paying with credit cards, which is all bad advice,” says Paladini. “The IRS interest rate changes every quarter but has been hovering around 4%, which is dramatically less than interest on a credit card.”

The bottom line is that private debt collection companies don’t care if they ruin your financial future, which is why they are not hesitant to suggest terrible payment options.

“These private collectors only care about what they can get out of you right now,” says Anthony Parent, a lawyer and managing partner of IRSMedic.com. “They hope to rattle you so deeply that you panic and do something you otherwise wouldn’t do if you had a real advocate on your side. Dipping into retirement to cover tax debts can be dangerous, especially when you’re close to retirement.”

“When the Internal Revenue Service (IRS) comes knocking on your door, it can be the scariest time in your life,” says former IRS Revenue Officer Nicole Christopher. She and her partner, Norma Swink, served as IRS collections officers before starting their own company, Your Tax Remedy.

Private debt collectors are working in direct opposition to the mission of the IRS, says Christopher. “Such collectors operate based on fear and intimidation, and their main goal is collection, not resolution.”

Rather than fall prey to an unscrupulous private tax collection company, it’s advisable to seek the help of a tax relief company. “Although there are some incompetent tax relief companies out there, others are good at helping you resolve your tax issues,” says Parent. “A good tax resolution firm could save you from complete financial devastation.”

Tax relief companies, such as Optima Tax Relief and StopIRSDebt, offer various services from assistance with correspondence regarding an audit to reducing a tax obligation and all of the necessary paperwork and filings. The best services assign a tax relief specialist to your case.

A tax relief company will inform you of the wide variety of tactics that can be used to negotiate back tax payments.

“Solving a tax problem may involve some counter-intuitive maneuvering, like creating additional legitimate expenses as a firewall between the absolute maximum the IRS is looking to extract from a taxpayer monthly and what is actually realistic to pay,” says Parent.

Many disreputable collection companies aren’t informing delinquent taxpayers of other collection alternatives, notes Paladini. “If low-income taxpayers can’t afford basic, necessary living expenses, they may qualify for Currently Not Collectible (CNC) status. This puts a hold on taxpayer accounts until they can afford various payment options.”

When you’re talking to a private IRS tax collector, there’s a good chance he or she won’t mention the Fresh Start Program. This IRS program acts as a clearinghouse, offering four main ways to solve tax debt: tax liens relief, installment agreements, penalty relief, and offers in compromise. An offer in compromise (OIC) is an agreement with the IRS where they will wipe clean your tax debt if you agree to pay a lesser amount. In 2020, the IRS accepted 17,890 offers in compromise, totaling nearly $289 million.

All of these options offer a better outcome for low-income taxpayers than cleaning out your retirement account or maxing out your credit cards.

Another possibility is declaring bankruptcy, which can completely wipe out old debts. “The rules for bankruptcy tend to be more generous than IRS settlement guidelines. Sometimes, just the threat of bankruptcy may get the IRS to come down to earth on what they’re demanding you pay. This is an advanced negotiation technique best used by tax relief experts,” says Parent.

“I receive a call a week from concerned taxpayers about such calls,” says Paladini. “There are safeguards in place so taxpayers can distinguish between a scam and legitimate call, but some private tax collection agencies, like Pioneer, are only giving taxpayers five days to receive the letter authorizing them to collect the debt. This isn’t nearly enough time to determine if the letter is legitimate. Sixty days is more reasonable.”

If you get a call warning you that you’ll be arrested if you don’t pay, be aware that it’s a scam. The IRS doesn’t threaten you into paying. “If they ask for payment via an unusual method, like gift cards, it’s a scam,” says Paladini. “If you’re ever in doubt, hang up and call the IRS at one of the numbers on their official website to see if you have any tax issues.”

Why you want to avoid tax liens and levies

A tax lien is a claim against your personal property such as your house, car, or boat. It can also be applied to your business or retirement account. Essentially, it’s a means to apply pressure to get you to pay your taxes. It’s worth noting that a lien does not give the IRS ownership of your personal items, but it can grant them rights to the proceeds of any sale of those items.

A tax levy is where the IRS actually seizes your property after giving formal 30 days notice.

Ignoring back taxes is a mistake

Just because you haven’t heard from the overburdened IRS collections staff about your back taxes for a while, it doesn’t mean they’ve forgotten about you.

“Many people go years adding new back taxes to their existing debt, figuring that the IRS can’t be all that upset,” says Parent. “The IRS only intercepts their refund checks, and they figure they can live with that.”

The fact is that the IRS only has a limited amount of time (10 years) to collect back taxes and very limited resources. For this reason, they tend to focus their collection efforts on large debts that are close to expiring.

“Don’t think you’re lying low,” says Parent. “The IRS is just waiting for your problem to get big enough before they drop the hammer. Resolve your tax problems before you’re up against the wall.”